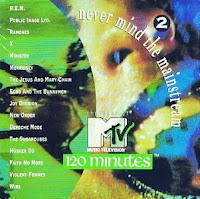 I promise this won't be a whiny "remember when MTV played videos?" post (all the videos are on YouTube, go over there to watch them and quit yer bitchin' already). I'm not really qualified to speak about the 120 Minutes program because in the late '80s I rarely stayed up that late (poor me always had an 8:00 AM class) and I didn't have a VCR, so what's a broke college kid to do? But I was aware of the program, may have seen occasional bits and pieces, and many of my music-minded friends enjoyed it, so when I saw this compilation in the used bin a few weeks back, I couldn't pass it up for two reasons: 1) nostalgia, and 2) it's a Rhino compilation and those folks were doing exceptional work at the time of this CD's release. 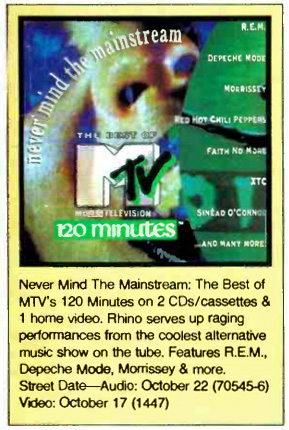 Tracks:
Personal Memory Associated with this CD: 120 Minutes premiered in '86, but I have memories of people watching it in '85. My mind, it goes. [shrug]

Email ThisBlogThis!Share to TwitterShare to FacebookShare to Pinterest
Labels: 1991 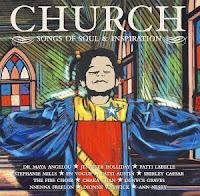 Well this certainly is a pleasant surprise. I got this CD set in a large lot of discs a couple of years ago, glanced at the title, ignorantly figured it for a compilation of hymns or monks chanting or some such, and set it aside. It ain't that at all:


And it is scratching me right where I itch.

I am on record as believing that you can't have gospel music without gospel lyrics, but this stuff exists in a grey area between genres that makes me question such thoughts. But belief cannot exist in the absence of doubt, and since R&B evolved by taking gospel tunes and changing every occurrence of "Jesus" in the lyrics to "baby," I guess it can go the other way, too.

As church sermons I hear seem to be devolving into either prosperity gospel or confirmation bias statements of "God hates the same people I do," it's nice to be reminded about God's mercy, grace, and love, even if it's through Bee Gees lyrics. 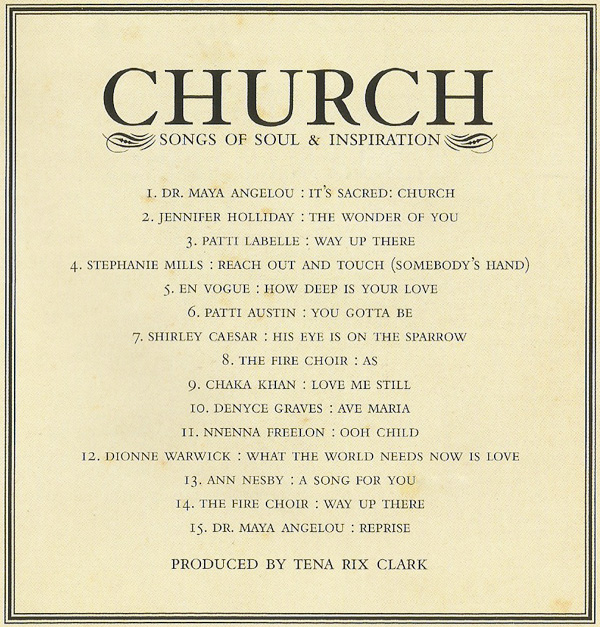 Sweet mama! A gospel take on Stevie Wonder's As? Please and thank you very much. Other standouts include Way Up There (Patti LaBelle) and You Gotta Be (Patti Austin).

I could listen to the late Dr. Maya Angelou read a take-out menu, but when she's reading her own writing, it's top shelf.

The only thing missing is a fast-paced shout piece by an authentic gospel chorus, complete with upbeat clapping and Mrs. Sneed singing too loudly. All the cuts are slow to mid-tempo affairs.

Also included is a second disc allegedly containing performance footage and artist interviews, but this 2003 CD-ROM is not compatible with my current operating system and I'm too lazy to chase down a work-around.

Personal Memory Associated with this CD: Yeah, I'm a preacher's kid, but this music bears little resemblance to the reformed, traditional hymnody I was raised on. Better late than never?

I'm also reminded of a college classmate, George, who grew up in this tradition and could play a mean gospel piano. I would sit in a practice room with George and just listen to him play. Once, I asked him how he learned to play that way - the chromaticism, the chord substitutions and inversions, etc - he shrugged and said he just picked it up.

Email ThisBlogThis!Share to TwitterShare to FacebookShare to Pinterest
Labels: 2003 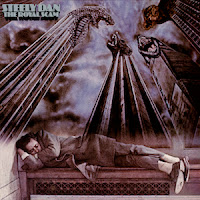 For this guy, this album plops right in the middle of the seven albums Steely Dan released during their "classic era" (1972-80), right behind Aja, Gaucho, and Katy Lied. I can't complain about any of the material (especially the white boy funk tunes that include a Clavinet part) and Larry Carlton brings his 'A' game throughout, it just doesn't grab me like the three other SD albums mentioned above. That don't mean it's bad, though. To my ears, there's only one misstep and that's the weak reggae arrangement of an otherwise decent track, Haitian Divorce. Still, that's not enough to make me skip it. And the kink-funk of The Fez is easily worth the price of admission. 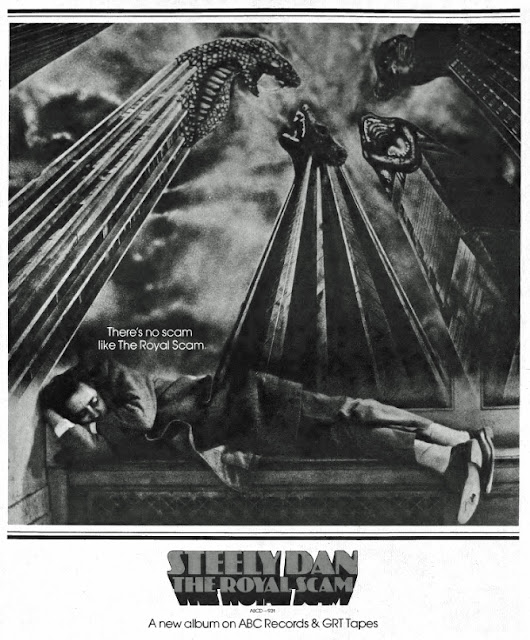 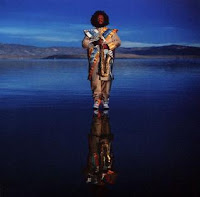 Three hours of wonderful genre-bending music from the mind of Kamasi Washington. If nothing else, Washington certainly is prolific. I'm not sure if I'm supposed to like it more than The Epic, but I do (maybe because of a seventies vibe I'm picking up). The writing is better (read: more melodic and structured) but the characteristic choral harmonies and instrumentations are there. This time around, though, he added trumpeter Dontae Winslow to the mix and, as a recovering trumpet player myself, that is a welcome addition indeed.

But wait - there's more! Kamasi hid a bonus 3rd CD in the packaging, a full 40 minute album entitled The Choice. Mentioned nowhere in the liner notes/credits, the only clue to its existence was a small, barely noticeable perforation at the top of the cardboard digipak sleeve: 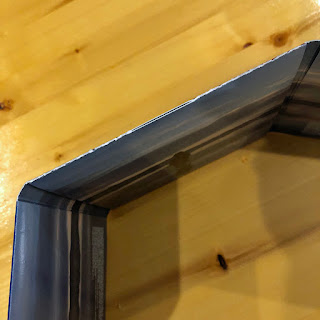 After a precision cut with a knife, the disc (along with an accompanying credit sheet) slides right out the top:

But I encourage you to buy a copy, set aside an evening, leave your phone in another room, put on some headphones, and judge for yourself.

Tracks: The title is Heaven and Earth, but the packaging suggests listening to the Earth disc first. For the opening track, Washington took the theme song to the 1972 Bruce Lee film Fist of Fury, renamed it Fists of Fury and turned it into a full-fledged political anthem. Other highlights of disc one are Can You Hear Him, Connections, and Testify. The most consistent Kamasi I've heard; don't skip any tracks.

The Heaven disc is more orchestral and stretches out a bit. My favorite tunes on this CD are the quieter Vi Lua Vi Sol (is that a vocoder??), Show Us The Way, and Journey, a plaintive waltz.

The Source disc is a slightly different animal, but a fantastic bonus. Three Washington originals, two covers - actually, they are more complete deconstructions of the two pieces, Will You Love Me Tomorrow and Ooh Child. Not surprisingly, those are my favorite cuts, most likely because of my familiarity with the source material. Of the originals, I prefer the third track, My Family. My guess is that family is what the title Source refers to, but what do I know?

Personal Memory Associated with this CD: None, this isn't the kind of disc I normally throw into the car when headed out on adventures. 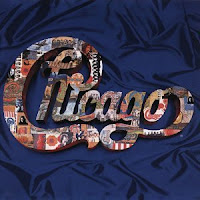 As the title suggests, this is a compilation CD from Chicago - there are many; this is the fifth Chicago compilation set to appear on this blog. It's pleasant enough as I usually enjoy Chicago tunes (although, admittedly, I gave up on them in the later half of the 1980's). I have all but two of these tracks on other CDs, those two mediocre tracks being recorded for this disc in a shameless attempt to have serious, completist fans to spend more money. And, to be honest, if "completist fan" described me, I would have bought this package in 1998 just for those two tracks, regardless of quality, because that's what we music junkies do.

Tracks appear to be selected and sequenced arbitrarily. You're better off with the Rhino 2 CD set, Only The Beginning: The Very Best Of Chicago.


Personal Memory Associated with this CD: None, IIRC, it appeared here at blog headquarters a few years back as part of a large menagerie of CDs.

Email ThisBlogThis!Share to TwitterShare to FacebookShare to Pinterest
Labels: 1998, Chicago 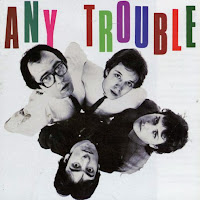 I first heard this New Wave power pop/pub-rock group on the Just Can't Get Enough: New Wave Hits of the '80s, Vol. 6 CD where I oddly compared them to Marshall Crenshaw even though the more obvious comparison is to Stiff lable-mate Elvis Costello (hell, let's throw some Nick Lowe and Joe Jackson in the mix while we're dropping names). I was treated to a few more tracks from the band on the wonderful Big Stiff Box Set so I jumped on this CD when I recently saw in the used clearance bin for $1.99 (I can only guess the previous owner unloaded it when they purchased Cherry Red Records' The Complete Stiff Recordings 1980-1981 box set).


Smash Hits rated it an 8 out of 10, Robert Christgau gave it a C+, Cash Box called the band's sound "hard to resist," while Billboard stated that the album "might be Stiff's most commercial offering to AOR radio to date." The Virgin Encyclopedia of Eighties Music gave the album 3 out of 5 stars while the cover story of the July 12, 1980 edition of Melody Maker labelled the band "the most exciting rock 'n' roll group the MM has seen since The Pretenders" and this LP "the best Stiff album since Elvis Costello's My Aim Is True." 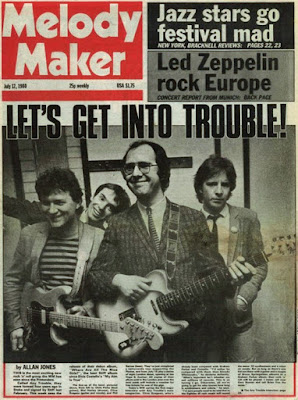 So that's your critic wrap-up from 40 years ago. Me? I dig the thing and am putting it in my truck's CD player for the foreseeable future, so if you're a co-worker and want to go grab lunch soon, you've been warned.

Tracks: So many hooks - gimme gimme! My faves are Yesterday's Love, Second Choice, The Hurt, Girls Are Always Right, and (Get You Off) The Hook. Like most albums, there's some filler tracks but they're not skippable, they simply pale in comparison to the others. The band covers Bruce Springsteen's tune Growing Up, and while the lyrics of adolescent angst fit in with the other tracks, the music does not.

At the end of the CD, tacked onto the end of track 13, they've included radio promos for WXRT Chicago and Q104 (WQBK-FM) Albany.  Could have done without those, but whatevs. 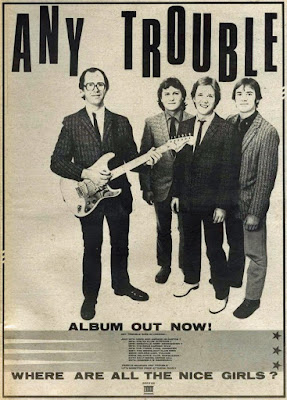 Personal Memory Associated with this CD: None, although I sure wish I had known of the group in my high school days in the early '80s. We fell in love with The Knack the previous summer and it would have been a short jump from Get The Knack to Where Are All The Nice Girls.

Email ThisBlogThis!Share to TwitterShare to FacebookShare to Pinterest
Labels: 1980, Any Trouble

The Music of Johnny Mathis: Your Personal Sampler (1993) 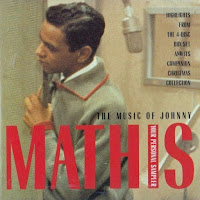 
Johnny Mathis was blessed with an immediately recognizable smooth voice and impeccable sense of phrasing. Over his career, he had 20 Billboard Top 40 hits, 18 of those between the years 1957-1963, so chances are slim that this career-spanning compilation focuses exclusively on the hits. At least it includes his two chart-toppers, Chances Are and Too Much Too Little Too Late, a 1978 duet with Deniece Williams (I can sing both parts to the latter if you'd like to hit the karaoke bar later). I like those two mellow hits, along with his take on the standard Misty. Based on a sample size of my immediate family, I'll conclude that Mathis is mainly known to audiences today as a crooner of Christmas tunes, so I'm glad they included a couple of those. The most interesting find, however, is track 10, The Island. It was recorded in 1989 as part of a unreleased yachty Brazilian album produced by Sergio Mendes. I wouldn't mind hearing more tracks from that album.

Even if you could come across this CD, I wouldn't recommend it as a definitive Mathis compilation. Too few tracks, not enough hits. You'd think they would have included at least one disco track from his 1979 album, Mathis Magic.

Peak on the US Billboard Top 200 chart: Promo only; did not chart


Personal Memory Associated with this CD: None.