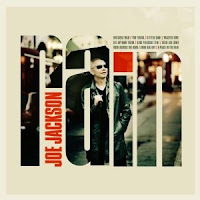 I had given up on Joe Jackson when he turned to being a "serious musician" who shunned pop music in favor of symphonies and movie scoring. I was glad when he changed back to a rock star and recorded this CD with only a piano trio. This trio shows off Jackson's skill as a pop songsmith. His lyrics and singing aren't always the best (he uses a lot of falsetto on this release), but they don't detract from the material. Some of these songs wouldn't be out of place on my favorite Jackson album, 1982's Night and Day. As of this writing, the album's score on metacritic is 71 out of a possible 100. I think that score is right on the money.

Tracks: My favorites are Invisible Man, Too Tough, Wasted Time (even though it is a clear rip-off of Easy to Be Hard from the musical Hair), The Uptown Train (the best cut on the album, it sounds a lot like something from Ramsey Lewis or Joe Sample), and Rush Across the Road. Weaker cuts include Citizen Sane, Solo (So Low), and Good Bad Boy.

Bonus DVD: Concert video of Invisible Man, Wasted Time, and Good Bad Boy. The live versions sound just like the studio versions. Joe takes us on a 10 minute tour around Berlin, where the album was recorded. Also included is a "Making the Record" clip which has no insight into Jackson's creative process. This track is to be skipped unless you enjoy watching the band play foosball. Interviews with Joe and the band are OK, but nothing worth watching again. In fact, don't bother with the DVD.