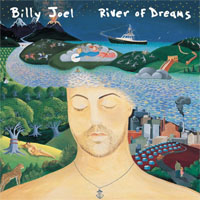 I bought this album when it was released, didn't much care for it, sold it/traded it in, and forgot about it. I obviously thought it wasn't one of his better efforts. Joel was past his prime. Paying $2, I picked up another copy out of the clearance used bin earlier this month. I haven't heard the whole thing in over 25 years; let's give it a spin.
Had the piano man given up on piano? There's a lot of guitar here, which I guess should be expected when you get a guitarist to produce. I've got nothing against Danny Korthcmar, but I'd rather have Phil Ramone, Liberty DeVitto, and a Steinway. And don't get me started on the blatant cultural appropriation  (which normally doesn't bother me much but I'm admittedly piling on here, so...) or the cover art by then-wife Christie Brinkley.
The verdict: after giving this another listen, I still don't care much for it. It's not that I gave up on Joel because of this album. I bought his 2001 "classical" piano album and saw him in concert in '99. I just don't think there's enough strong writing, both musically and lyrically, on this one.

Tracks: The standout track is the beautiful Lullabye (Goodnight, My Angel). Despite the bitter lyrics, The Great Wall Of China has a good rock groove I'd forgotten about and a chorus that hearkens back to The Nylon Curtain. The Memphis-influenced A Minor Variation and, although I don't know what he's on about, the sea-chantey Two Thousand Years are decent filler. I'll pass on the rest, including the two Top 40 singles (mentioned on the hype sticker, below) which never seem to get going for me.
The album is not without some unintentional irony: a soulless song titled All About Soul and vague lyrics in a song titled Shades Of Grey.  However, the last track is Famous Last Words which was foreshadowing his retirement from studio albums - that's my 20/20 hindsight in 2020. 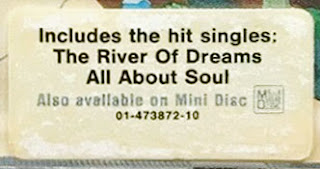 Did somebody mention MiniDisc? 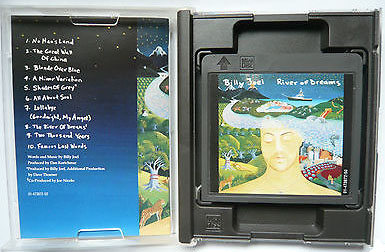 Personal Memory Associated with this CD: At the time of this release, I was just starting a 4 year stint as a stay-at-home dad. I had no idea what I was doing or should be doing which is quite frustrating. Plus, we had little CD (not to mention food) money because we'd given up my salary. Still, it's not a bad way of life and that son (now age 27) turned out better than I could have ever hoped. I've got plenty of regrets in my past, but the decision to stay home those four years is not one of them.