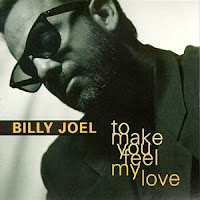 I'm not much of a Bob Dylan fan and I had pretty much given up on Billy Joel after his awful River of Dreams release, so it's surprising that I would buy this CD single of Joel covering a Dylan song. The song was recorded for a greatest hits package, so I might have bought it to satisfy some sort of compulsive need to have a complete collection.

Tracks: 4 tracks here: the first two are versions of the single. Of these two, I prefer what Joel calls the Bare Bones version, which really isn't bare bones, but is less busy than the album version. A cover of Elton John's Goodbye Yellow Brick Road isn't very original or unique, but Joel and John were touring together quite a bit at the time. The disc ends with a straight ahead cover of Hard Day's Night. Meh.

Personal Memory Associated with this CD: This is probably the first time I've listened to this CD since I bought it in '97.