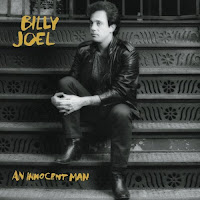 In the late '70s and early '80s, a new Billy Joel album was normally purchased within a week of the release date. Released just before my senior year in high school, this album was no exception. Being single for the first time since he was a teenager, Joel paid tribute to popular music of his youth here, with homages to soul and doo-wop music. After the somber, Beatlesque album The Nylon Curtain, this album was a complete change of direction and became Joel's second most successful album after The Stranger. Joel was happier and it shows in this infectious music. I was growing out of my teenage angst years around this time and was much happier myself, so this album got a lot of playing time as it suited my general mood around that time (senioritis). Alas, this was to be Joel's last consistently great album. It's not that his next three studio albums didn't have some great pop songs on them, they just all have a lot of filler on them, too. He had a nice run (1977-83), though. 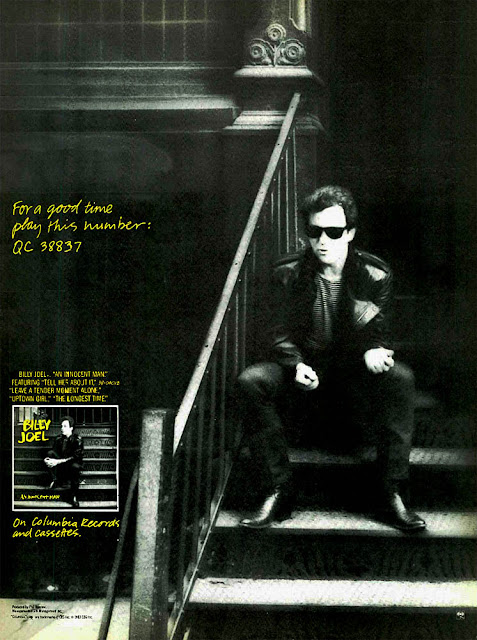 Tracks: Even though many Joel fans have come to despise it, the best song here for me is the Frankie Valli tribute Uptown Girl. I can't help but smile and sing along with it every time. Other favorites are The Longest Time, This Night, and Tell Her About It. I'm not wild about Careless Talk or Christie Lee. In addition to this album, I had a 12" single of Tell her About It with a Jellybean Benitez remix; I've never found a legal digital copy. This just goes to show that everyone was doing the 12" remixes back then.


Personal Memory Associated with this CD: On this date 28 years ago, some high school friends and I traveled to Houston to see Joel on tour supporting this album at what was then known as the Summit. No opening act, just non-stop hits (setlist with chart info below). 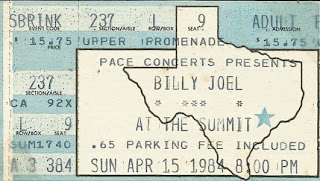 Naturally, I bought a concert tee. The sleeved tees were attractive, but I made the decision to buy this uglier choice because I loved the sleeveless look popular at the time: 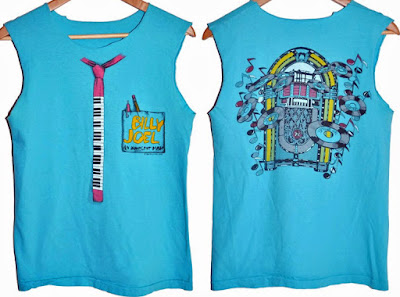 I would bet my house that thing was worn to school on Monday, April 16.