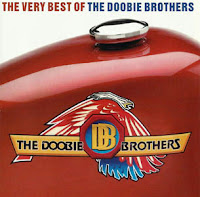 Many groups release double disc greatest hits compilations, but few have the catalog to pull it off. The Doobies come close, but there are 33 tracks here spanning the years 1970-2000. Whew! That's a lot of Doobage. I never owned a Doobie Brothers LP, so the 2001 Greatest Hits compilation would probably been a better choice for me. Liner notes are just average which is surprising for a Rhino release. Fans will complain that some versions of the songs are the radio edits, but if you grew up listening to this group on the radio (like me), then you'll be okay with that decision. As of this writing, The Doobie Brothers aren't in the Rock 'N' Roll Hall Of Fame; the evidence here would suggest they probably should be. As I listen today, I'm noticin' there are a lot of Doobie Brothers' song titles that drop a final 'g' in favor of an apostrophe (e.g., rockin', runnin', takin', dependin', rollin').

Tracks: From the band's early AM radio days, I like Listen To The Music, Rockin' Down The Highway, Long Train Runnin', China Grove, and Black Water. The only early track I want to skip is I Cheat The Hangman, which sounds like a bad Yes or Moody Blues knock-off.

And then there's favs from the Michael McDonald era: Takin' It To The Streets, It Keeps You Runnin', What A Fool Believes (even though I could never figure out the mumbly lyrics to that one), Minute By Minute, Real Love, You Belong To Me, and One Step Closer (which I always thought should have been a bigger hit).

From the later years (1989-2000), there's nothing that really stands out to me, but the 6 songs here definitely have an early '70s flavor to them - I could see die hard fans loving them.

Personal Memory Associated with this CD: Not so much with this CD, but I still remember the band appearing on a couple of episodes of the ABC sitcom "What's Happening?" in the late '70s. If memory serves, the episodes focused on illegal bootleg recording. I doubt I could sit through those episodes today.

I also remember being part of an impromptu a capella version of of Black Water spontaneously breaking out at a church choir rehearsal in the late '80s. If that had happened today, someone would have recorded it on their phone and uploaded it to YouTube before rehearsal was finished.

Previously revisited for the blog:
Michael McDonald - The Ultimate Collection (2005)
Posted by Mark at 5:45 AM

Email ThisBlogThis!Share to TwitterShare to FacebookShare to Pinterest
Labels: The Doobie Brothers