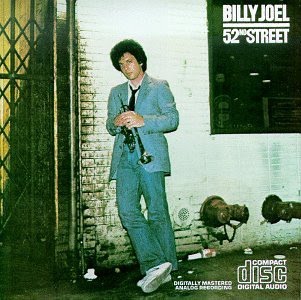 
According to Sony Music (and appropriate for a blog titled The CD Project), 52nd Street was the first album to be released on compact disc when it went on sale alongside Sony's CD player CDP-101 on October 1, 1982, in Japan.

That Billy Joel was able to produce such a consistent album within a year of this breakthrough LP, The Stranger, shows that he finally figured out the formula that worked for him. Along with Glass Houses, this album is one of two Joel albums I can easily listen to from start to finish. Even though Joel would continue his success into the late '80s, the music on this CD represents the part of his career when he was consistently at his best. Unfortunately, in recent years, he's became a lounge act (why write new music when people will pay to hear your old music?). I wonder when he's going to start playing Vegas.
Press of the time: 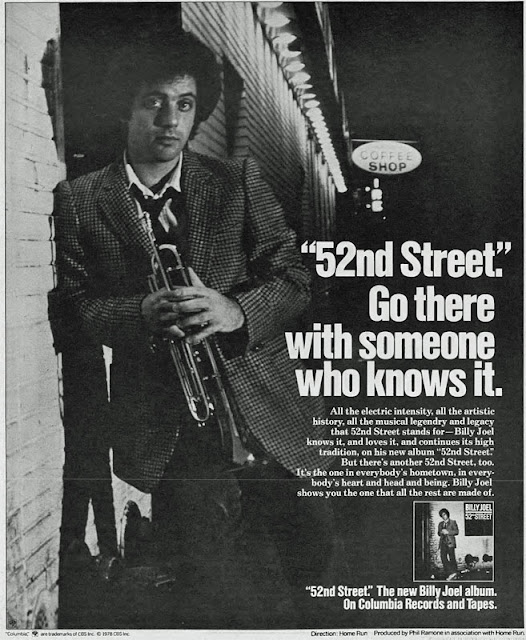 The album holds the distinction of being the first album to be #1 on the Rolling Stone chart when it premiered in the December 14, 1978 edition.

Tracks: All nine tracks are good. The only one I'm tempted to skip is Honesty, not because it's a bad song, but because it was so overplayed back in '79. Zanzibar gets a special mention because of the trumpet solos by Freddie Hubbard. Even the filler cuts on what was side two (now tracks 5-9) are all good songs, especially Rosalinda's Eyes and Until The Night. My LP version of this album had a bad scratch on Until The Night and even now I still think the song is going to skip and repeat a line when I hear it.

Personal Memory Associated with this CD: The song My Life reminds me of the Tom Hanks sitcom Bosom Buddies that used the song for its theme music. I also remember buying this LP on a Friday and knowing all the lyrics by Sunday. That's all I did all day Saturday was listen to the record over and over. The lyrics in the second verse of Zanzibar aren't really about baseball, aren't they? Until today, I had never noticed the large Heineken ad in the window on the album cover.
Posted by Mark at 1:56 PM