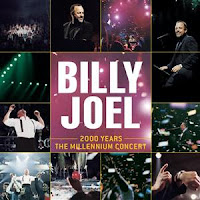 Not a great live disc, this serves purely as a souvenir for me (see below). Joel's voice wasn't strong that night, which is to be expected at age 50, countless concerts, and plenty of cocktails. I can even forgive him for lowering the keys of several of his songs to accommodate his voice. However, I never figured Joel would become a Vegas act with all the trappings: using Beethoven's 9th Symphony as entrance music, self-promoting patter, John Wayne impression, augmented band with backup singers, overblown arrangements, and drunken screams, whoops and hollers (from Joel, not the audience). These are things I can almost forgive in a live show, but not on a live album. Joel has a catalog of fantastic songs and they deserve better treatment. I will give Joel some credit for his song selection for a New Year's Eve concert: instead of sticking strictly to a greatest-hits approach, he chooses songs with lyrics about either beginnings, endings, or transitions. The recording/production is great, the actual performance is disappointing. Joel's best live album remains Songs in the Attic. I love ya, Billy, but I'm going to stick to your releases from the '70s and '80s.

Tracks: Over 2 hours of music and jibber-jabber over 2 CDs. Quite a few hits are here, along with a Rolling Stones cover (Honky Tonk Woman), a Sly Stone cover (Dance To The Music), and the obligatory, seemingly unrehearsed Auld Lang Syne at midnight. For me, the highlights are Allentown, Prelude/Angry Young Man, Big Man On Mulberry Street (the one tune that fits the size of the band), and Scenes From An Italian Restaurant. While none of the versions here come close to the studio versions, I particularly don't care for We Didn't Start the Fire and River Of Dreams with its inexplicable inclusion of a verse of Land Of Thousand Dances.

Personal Memory Associated with this CD: On this date 12 years ago, my wife and I saw Joel's concert at Houston's Compaq Center (the former Summit, now Lakewood Church). 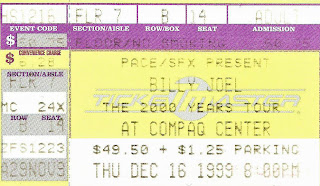