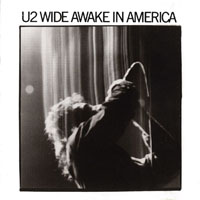 Note: this release was originally purchased as a cassette tape, later replaced by a CD.
EPs from the early '80s didn't often see a CD release, but when you're U2 they make exceptions. (Now if we could only see some CD releases of Dekadance and Twisting By The Pool, but I digress.) Advertised as "A special low priced collection of live recordings and out takes from The Unforgettable Fire tour and album 1984-85." These days, they'd just tack these tracks on the end of Deluxe Edition CD and brickwall the things, but fortunately these tracks sound as good as I remember them on my Pioneer car deck back in the summer of '85.
As with most U2 recordings, Edge steals the show, but all band members put their best foot forward here, especially on the two live tracks.
Press of the time:
Peak on the US Billboard Top 200 chart: #37
Peak on Cash Box album chart: #26
Peak on the Rolling Stone chart: #21
Tracks: the two live tracks are both better here than their studio counterparts on The Unforgettable Fire. It's a close contest for my top tune on this EP between Bad and Three Sunrises; the latter sounding like it might have been an outtake from War but with vocal harmonies The Association would be proud of. I'm not wild about the final cut, Love Comes Tumbling, which sounds to me more like an Echo & The Bunnymen b-side than a U2 b-side.
All tracks recorded in England, so I'm guessing the EP title was a marketing ploy. Well, it worked on this guy.


Personal Memory Associated with this CD: This cassette was in heavy rotation in my car during the summer of 1985. As a public school teacher, I've enjoyed some great, carefree summers in my life, but that summer after my freshman year in college certainly ranks right up there.

Email ThisBlogThis!Share to TwitterShare to FacebookShare to Pinterest
Labels: 1985, longbox, U2