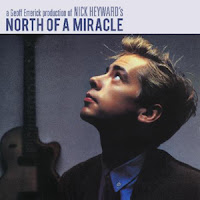 Disclaimer: As I've written before, I'm an unapologetic Heyward fan. I own and often listen to his entire catalog. This album has a spot on my "desert island" list.  If you're okay with all that, then read on...

It seems that every music lover I know has that one artist that they inexplicably love even though they seem alone in that blind adoration.  I'm sure you have at least one such artist of your own - the one that brings out the incredulity in you as you scream "most underrated ever!"  For me, Heyward fits that definition.  This album was just what this 17 year old boy needed in the fall of 1983.  It was one of the first pop LPs I replaced with a CD in 1990.  Even 30 years later, this album continues to get significant playing time.  In other words, it struck a chord with me (bad pun intended).  I never could get any of my high school or college friends interested in Heyward's music or that of his previous band, Haircut 100, but I listened to this all the time.  To me, everything clicked: the writing, the production (by Beatles' engineer Geoff Emerick), the orchestration, the performances, etc.

John Hughes must have liked this album, too.  Two songs from it (When It Started to Begin & Whistle Down the Wind) appear during the school dance scenes in the 1984 Hughes classic, Sixteen Candles.  The 2010 rerelease includes some great liner notes.  The author, English broadcaster Gary Crowley, is obviously as big a fan of the album as I am.  There's a little clipping to this rerelease, but not so much that it bothers me; it's not like I don't have other copies of this music sitting on my shelves.

Metacritic.com wasn't around back in 1983, so here are some links to other album reviews:

Tracks:  I have to admit that I've always preferred what was side one (originally tracks 1-5; but tracks 1, 2, 7, 3, & 4 on this release) to side two, but I've really got no complaints here. My favorites have changed over the years: originally my faves were Take That Situation and Club Boy At Sea; these days I'm liking the 1-2 punch of Two Make It True segueing into On A Sunday.  Who knows what I'll favor next month?

Bonus tracks: b-sides, 12" remixes, instrumental versions, and 9 live tracks from Heyward's 1983 tour stop in London.  Stretching the playing time to over 2 hours, all tracks are essential.  I'm sure you'd expect me to write nothing less.

Personal Memory Associated with this CD:  I remember hurrying home from school one cool, rainy fall afternoon, locking myself in my bedroom, and playing this album.  Everything just fit.  I also remember repeatedly listening to Take That Situation (especially the sax solo over the key change) on a Walkman during a family vacation, most likely around Christmas '83.  That must have driven my parents crazy.

I've still got four import 12" singles related to this album.  One is autographed although the signature isn't authenticated.  (Nick, if you're reading this, could you authenticate your signature? Kthnx.) 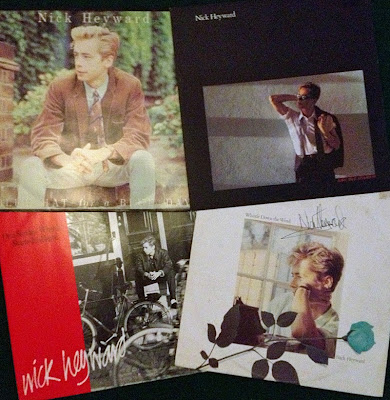 I listen to this album often but I've put off blogging about it for almost 3 years, afraid that I'd gush too much.  How'd I do?
Update [Sept 7, 2020]: during the COVID-19 pandemic, there were plenty of virtual album listening parties available as people stayed at how and worked from home. This album was chosen for a June 1 party. Click here for Nick's own tweets/thoughts/remembrances about this great album: Tim's Twitter Listening Party