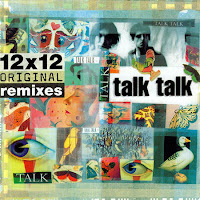 UK Import (re-released in 2001 under the title Remixed)
Today at blog headquarters we're celebrating the 12th anniversary of The CD Project, which started back on September 15, 2010 when I posted a few random thoughts about Paul Simon's Graceland album. Twelve years and 1800 CDs later, I was able to find a fantastic dance remix CD with the number '12' in the title and here we are.
Talk Talk is one of those groups that makes me facepalm as I say to myself, "you know, the older I get, the better they were!" I listened to the group back in the '80s, but, for some reason, not as much as I probably should have. The 12 x 12 in the title of the disc refers to the fact that this compilation consists of 12 tracks which appeared on 12" singles in the '80s. I had my fair share of 12" remix singles back in the '80s, but none from Talk Talk. To be honest, I gave up on the group after It's My Life and that's on me. Singles here were originally released 1982-1986. Such A Shame appears twice here but I won't nitpick.
According to Discogs, there are only 4 discs in the 12 x 12 series, including one 'promo-only' release. The Thomas Dolby 12 x 12 compilation previously appeared on the blog.
Tracks:
It's My Life is not only my favorite Talk Talk song, it's one of my favorite sings of the entire eighties. Other top picks are the mixes of Talk Talk, Dum Dum Girl, Today, Life's What You Make It, and Pictures Of Bernadette.
Personal Memory Associated with this CD: None
Previously revisited for the blog:
Natural History (1990)