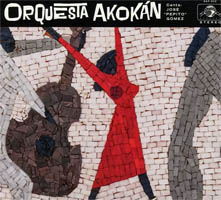 Akokán is a Yoruba word used in Cuba meaning “from the heart,” and indeed, every song on the self-titled debut album by Orquesta Akokán feels like a heartfelt gift from the band to the listener. Assembled and led by Cuban vocalist José “Pepito” Gómez, Orquesta Akokán is a big band collective of the finest musicians on the island, both young and old. It features all-original music and was cut live to tape over a three-day session at Havana’s hallowed state-run Estudios Areito. Areito is one of the longest operating studios in the world and where important Cuban records have been made. The album was produced by Jacob Plasse and arranged by Mike Eckroth.

And the CD is as advertised: new, original Afro-Cuban music in the manner of the pre-revolution dance genre as re-popularized by the Buena Vista Social Club. I'm also hearing some Perez Prado and Tito Puente influence in these cuts. Perfect for an evening with a cigar or a dance partner or a mojito. Or all three.
The music is joyous and infectious, always improving my mood. Plus the musicianship is impeccable - these folks can play. But even I was pleasantly surprised to see the high Metacritic ranking of 90. I don't know much about Afro-Cuban music other than to say "I like the stuff" so let's just leave it at that and let it play.
The album was nominated for a Grammy in the category of Best Tropical Latin Album. More on the band available at their website and in this 2018 Billboard magazine feature.

Personal Memory Associated with this CD: This disc was a pre-pandemic gift from my high-school buddy and cigar-smoking companion, Jim, and was immediately added to my modest 'back porch Afro-Cuban' playlist.