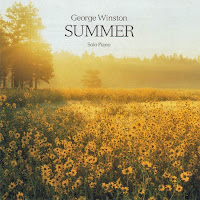 Note: the CD I listened to was the original 1991 release.

Just what you would expect from a George Winston album: lots of peaceful, slow, relaxing New Age solo acoustic piano noodling. Like most New Age music, this is one of those albums that's perfect when I'm in a New Age-y mood and irritating as hell when I'm not. Also, there's nothing here that is very summerish to me, unlike previous albums December or Autumn, which somehow perfectly capture those times of year. 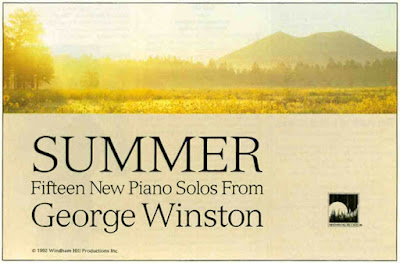 Tracks: Of the 15 tracks here, Winston wrote 7. The rest are arrangements of pieces by other jazz musicians, film composers, public domain, etc. It all goes down easy, but I'll pick out Winston's arrangements of Randy Newman's Living Without You and Carmine Coppola's music from the 1979 film The Black Stallion as my top cuts. Then there's the traditional tune Corrina Corrina as a track that doesn't seem to fit with the rest of the album. Of the original pieces here, I prefer track 7, simply titled Lullaby.

Personal Memory Associated with this CD: None. I picked this up last year for $1 out of a used bin.