Paul McCartney - Give My Regards To Broad Street (1984) 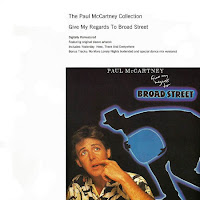 Note: the CD I listened to was the 1993 "Paul McCartney Collection" reissue with two bonus tracks. UK import.
Paul McCartney wanted to write a screenplay and because he's Paul McCartney and mostly funded it himself, somebody let him. So here we get McCartney as actor, screenwriter, and musician, not necessarily in that order. The movie is currently sitting at 21% on the Tomatometer.
I think the goal of the movie was to produce a sort of musical in which all the songs are loosely held together by a weak narrative thread - in this particular case, hunting down the lost master tapes of a new album. It looks like Paul chose the soundtrack music as if he was creating a concert setlist: a mix of old favorites along with a few new tunes. If anyone had gone to a McCartney concert in '84 and he had played this album from top-to-bottom, there would have been few complaints. Beatles! Wings! Latest hit! Ringo on drums! Fab! However, as a stand-alone album, critics - and to a certain extent record buyers - didn't care much for the re-recordings. To be honest, they never bothered me much and there's actually a few bits I enjoy as much as the originals.
With Purple Rain, Prince had spoiled us as to how good movie soundtracks could be in 1984. So compared to Paul's previous output and Prince's smash soundtrack, I can see where this release would be a disappointment to some. At times it is simply a vehicle to deliver the No More Lonely Nights single (and its reprise...and Playout Version...and Extended Version...and Special Dance Mix), but for what it is, I think it delivers. 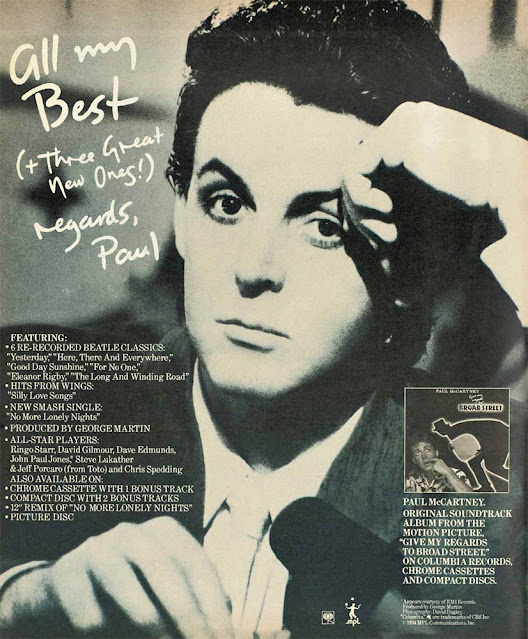 Tracks: here's the breakdown - 4 new tunes (plus all the variations on No More Lonely Nights), 6 re-recorded Beatles tunes, 4 re-recorded Wings/solo Paul tunes, plus incidental music and dialogue scattered throughout. No More Lonely Nights was a worldwide top ten smash, and I recently read a description of that record as Paul's "last great single." Hard to argue that point. (Spies Like Us would somehow peak on the charts at #7 in 1985; I wouldn't characterize that single as "great"). It's a characteristically beautiful McCartney ballad and while much is made about David Gilmour's fantastic guitar solo, not enough is said about Eric Stewart's thick, overdubbed background vocals that, not surprisingly, sound like they were lifted from a 10cc tune. The other original tunes here are easily forgettable as evidenced by the fact that I had indeed forgotten them over the past few decades until finding this CD. Actual dialogue heard at the end of track 7:

And sure, the earlier, original recordings are preferable, but the re-recordings here aren't as bad and superfluous as the reviews might have you believe. I like the little added bits such as the screaming trumpets at the end of Ballroom Dancing, the harmony vocals on The Long And Winding Road, and the oh-so-easy segue between Yesterday and Here There And Everywhere.
The incidental music can be a bit of a slog, particularly the 7 minutes of Eleanor's Dream and the 1940ish final track, Goodnight Princess.
Bonus tracks: For the die hard fans and/or completists out there. 8 minute version (Extended Version) and 4 minute version (Special Dance Mix by Arthur Baker) of No More Lonely Nights. Dance mixes of a ballad. Originally available on picture disc. Because Eighties. I had no idea these even existed prior to purchasing this disc. 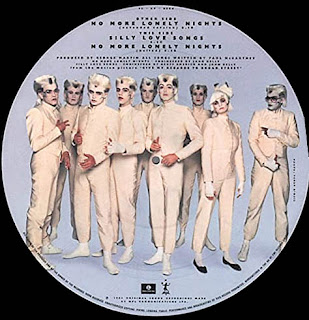 Personal Memory Associated with this CD: I don't remember how I originally came across a copy of this one back in '84 or '85. My best guess is that a friend had purchased a cassette which I dubbed on my Fisher stereo. I remember the arrangements being different, but I hadn't heard the album since probably 1985.
I didn't see it in a theater, but I think I saw the movie on VHS in the late '80s; can neither confirm nor deny.