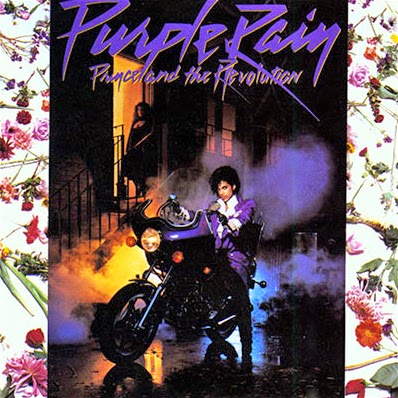 By request!  (In this particular case, "by request" means that a reader actually sent me a CD.  Thanks!)

Note: most of this post appeared previously over on the My Favorite Decade blog.  Reduce. Reuse. Recycle.

Dearly beloved, we are gathered here today to remember the music of Purple Rain (not the movie, because that thing's gawd awful).  I consider Prince to be more of a singles artist than an album artist, but to my ear, this is easily Prince's best, most consistent album and my dubbed cassette was never far from the Markmobile's Pioneer cassette deck or my new Sony Walkman WM-10 during the last seven months of 1984.  I think the other side of that 90 minute cassette had The Cars' Heartbeat City on it, which didn't get nearly the amount of playing time that Purple Rain did.

After giving us some albums that included great dance/funk tunes (e.g., "Dirty Mind" & "1999"), Prince creates the perfect funk/rock crossover here with scorching guitar licks over dance grooves that won't quit (and you don't want them to).  As Kurt Loder astutely wrote in his ★★★★ review in Rolling Stone issue 426: "Anyone partial to great creators should own this record.  Like Jimi and Sly, Prince is an original; but apart from that, he's like no one else." And we wouldn't want him to be.

Now, where's the remastered super deluxe special edition of this album?!?  I've been waiting for word since April; has it died on the vine?

Personal Memory Associated with this CD: The Markmobile (a 1972 Ford Maverick coupe) had lost its air conditioning by 1984, so the windows were always rolled down.  I distinctly remember a trip down Interstate 45 on a hot afternoon in October 1984 where all I listened to was "Let's Go Crazy" for two hours straight, singing at the top of lungs.  I hope the other travelers appreciated the marathon performance, because my voice was shredded by the time I reached my destination.