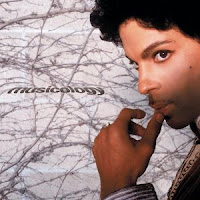 After a long, self-imposed hiatus in which he seemingly made records only for himself, Prince released this back-to-basics CD. This was his first major-label distributed album in five years (and his 30th overall!), released around the time he had an all-hits tour and was inducted into the Rock Hall of Fame. I saw a live TV performance around that time and that led me to buy this record. It's no Purple Rain, but it still has some good tracks. Favorite random lyric from this CD: "Just put ur name on this pre-nup and we can all hit the disco!" For a reason he refuses to articulate, my oldest son can't stand Prince's music. I feel like I've failed as a father.

Tracks: the title track is the best, bringing back the same funk groove we knew from the late '80s. Also good are Cinnamon Girl, Illusion Coma Pimp & Circumstance, Life 'O' The Party, and What Do U Want Me 2 Do? The track to skip is The Marrying Kind.

Personal Memory Associated with this CD: 2004 was a transitional year for me, so this didn't get the listens it probably deserved.

Email ThisBlogThis!Share to TwitterShare to FacebookShare to Pinterest
Labels: 2004, Prince