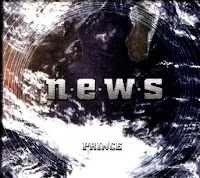 Prince has been listening to late '60s Miles Davis. This is an instrumental jam session release from Prince that can't decide if it wants to be new age, smooth jazz, or funk. The title is an acronym for North East West South and the four tracks on the CD are named as such. The CD cover identifies this as "new directions in music" which it isn't, but for Prince, I guess it is. Each track is exactly 14 minutes long, accentuating Prince's eccentricity. If you're expecting Prince to drop a funk bomb, then this release is a dud, but it's not bad for what it is. The saxophone tone of Eric Leeds is a bit harsh and abrasive for my tastes. If you liked Prince's work with Madhouse in the '90s, then you'll enjoy this CD.

Tracks: In order of my preference: North, West, South, East

Personal Memory Associated with this CD: None, but this is good mood music for a cold, wet day like today.
Posted by Mark at 9:25 AM

Email ThisBlogThis!Share to TwitterShare to FacebookShare to Pinterest
Labels: 2003, Prince