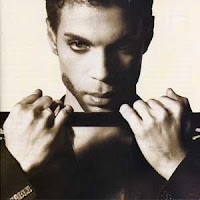 I was a Prince fan early on because my friend Jim had the 1980 album, Dirty Mind. This album covers material from those early days right through his heyday in the mid and late '80s. In my opinion, if you've got this compilation and the Purple Rain album, you've got all the Prince you really need.

Tracks: 18 tracks. My favorites are Controversy, Dirty Mind, I Wanna Be Your Lover, Head, I Would Die 4 U, Raspberry Beret, Kiss (although I much prefer the extended version), U Got The Look, and Sexy MF (which would make an attention-getting ringtone fo sho). I usually skip Do Me Baby, Little Red Corvette, and If I Was Your Girlfriend.

Personal Memory Associated with this CD: There's quite a few, but today I'm reminded of a end-of-year crawfish boil I helped host one year for some of my students and their parents (2003, maybe?). We had music playing and I just had a funk mix going when I suddenly heard the opening measures of Sexy MF. I bolted to the stereo and skipped the track as quickly as I could. I was in my mid-30's, but I don't think I've ever moved faster.

Email ThisBlogThis!Share to TwitterShare to FacebookShare to Pinterest
Labels: Prince