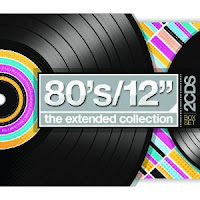 Argentinian import. This is a 2 disc compilation of remixes of '80s music. No liner notes whatsoever (what's up with that?). 12" singles were a staple in record stores in the '80s. I'm not sure my teenage sons would even know what a 12" single is. Just a second; I'll ask........ Nope, they have no idea what I'm talking about.

Tracks, CD 1:
Tracks, CD 2:
Personal Memory Associated with this CD: I purchased this compilation in April 2010 as I was getting ready to drive to IAH to fly to Denver for a conference. I remember listening to the discs on the 2 hour drive home from the airport.
Posted by Mark at 4:51 PM