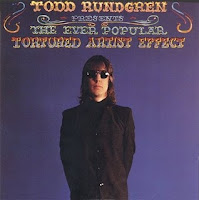 Note: this release was received as a gift as an LP, later replaced by a CD.

In 1982, Rundgren was unhappy with his record label, but was contractually obligated to deliver a solo record. This explains the record's cynical title and the fact that it only runs about 35 minutes. Rundgren threw together some songs that he quickly wrote, produced, and on which he performed all instruments. He reportedly disavows this album, but I think it's great and I'm glad I picked up a CD copy before it went out-of-print.

Tracks: You know the ubiquitous hit, Bang The Drum All Day. There's also a bad cover of the Small Faces' Tin Soldier and a Gilbert & Sullivan parody entitled Emperor of the Highway. Those three are the worse songs on the CD. The other 6 tracks are fantastic, forgotten pop tracks. I'd have to say that my favorite is probably Drive because I find myself singing that song to myself more than any others.

Personal Memory Associated with this CD: My LP copy of this release was given to me by my friend Jim. Jim bought a lot of albums in the early '80s and turned me on to a lot of music I would not have heard otherwise. He bought this LP and, it not being what he expected, gave it to me. Knowing Jim, he would probably would rather stick an icepick through his eardrum than listen to this music now, but I'm grateful that he exposed me to a wide variety of music.
Posted by Mark at 8:39 AM