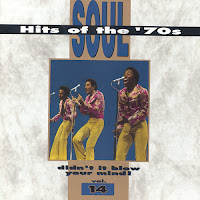 This is the volume 14 of the 20 volume Rhino series, released in the early '90s. Since it's a Rhino release, you can be sure that it is top-notch from track selection to liner notes. Unfortunately, the series is now out-of-print. The songs on this volume hit the charts between June 1974 and March 1975 which when I was just beginning to listen to a lot of radio. You can also hear the beginnings of disco on some of these tracks. Now I just need to locate the other 19 volumes...

Tracks:
Personal Memory Associated with this CD: Nothing comes to mind, but then again, there wasn't much soul music being played in the oilfields of West Texas in '70s.
Posted by Mark at 7:34 AM

Email ThisBlogThis!Share to TwitterShare to FacebookShare to Pinterest
Labels: 1974, 1975, Soul Hits of the '70s