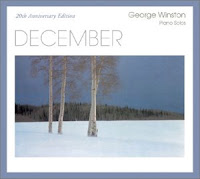 I suppose I have to listen to this CD during the month of December. Windham Hill was THE new age label in the early '80s. This emerging genre might have gone unnoticed by me if a friend of the family hadn't given this album to my father as a Christmas gift in '81. I had never heard anything like it and it was certainly different than anything else I was listening to at the time. The music is haunting and mesmerizing. Listening to it while looking at the album cover art (I wish I still had the 12" album cover) always transports me.

Tracks: Thanksgiving, Joy, Some Children See Him, The Holly & the Ivy, and Peace are all good solos. I could do without his take on Pachelbel's Canon, but that's probably because it is an overplayed work. The two bonus tracks fit nicely on the disc; my guess is they were omitted originally because an LP can only hold so much music without distorting the sound quality.


Personal Memory Associated with this CD: This album makes me fondly remember Christmases in Bay City during my high school years. This release, along with a church choir Christmas cantata introduced me to the carols of Alfred Burt, which are worth seeking out.
Posted by Mark at 9:26 AM