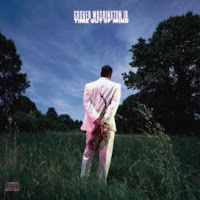 It's an age-old artist's dilemma: does the musician keep producing music without concerns for current trends, or does the musician evolve with an updated sound at the risk of alienating fans? In 1989, Washington had already produced a greatest hits album, had his biggest success with Bill Wither's Just the Two of Us, and had been recording almost 20 years. Millions heard his playing every Thursday night on The Cosby Show. So which would he choose? Well, if you listen to this CD, you'd assume he chose both answers. Some tracks are classic smooth Washington, some are updated with lots of synths and drum machines. There's also another attempt at a top 40 hit a guest vocalist. Since I'm a fan of Washington and the title track is a cover of one of my favorite Steely Dan tunes, I had to give this CD a try, but, at best, I would call it a mixed bag.
Ratings:

Peak on the US Billboard Top 200 chart: Did not chart
Peak on Billboard's R&B albums chart: #60

Tracks: The title track is everything I'd hoped it would be. Classic Grover Wasington, Jr. smooth jazz tracks include Gramercy Park, Split Second, Nice-N-Easy, and Unspoken Love. Late '80s synth-driven tracks include Jamaica, Brand New Age, and Don't Take Your Love From Me. Guest vocal by Phyllis Hyman on Sacred Kind of Love.

Personal Memory Associated with this CD: At the turn of the century, I was obsessed with finding cover versions of some of my favorite tunes. Around 2000, Napster was still a Wild West free-for-all, so that made my searches much easier. That's how I came across the title track which led to the purchase of the CD (probably from eBay).
Posted by Mark at 6:11 AM