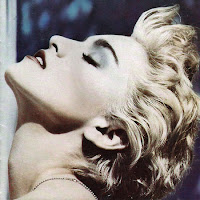 Ain't no Madonna like '80s Madonna. Back in '86, I would have called this unabashed synth-dance-pop album a guilty pleasure, but now I'm (much) older and (slightly) wiser and what's it to you if I listen to this? It's my second favorite Madonna album after the Nile Rodgers-produced Like A Virgin. Five of the albums' nine tracks were released as singles and to say they all did quite well would be an understatement:

While it may be my second favorite Madonna album, it's the leader of the pack when it comes to cover design - that lovely Herb Ritts photo sure can't be beat. My cassette copy got plenty of playing time on the Sanyo deck in my car at the time, a remarkably unreliable '85 Oldsmobile:

The album's opener, Papa Don't Preach, was nominated for a Grammy in the category of Best Pop Vocal Performance, Female, eventually losing to Barbra Streisand's Broadway Album. The first single, Live To Tell, was featured in At Close Range (a film I have yet to see), starring then-husband Sean Penn. The album is dedicated to Penn, "the coolest guy in the universe." I like the album and was happy to see a cheap copy pop up in a used CD bin so I could enjoy a trip down memory lane.
Press of the time:
Peak on the US Billboard Top 200 chart: #1
Peak on Billboard's R&B albums chart: #47
Peak on Cash Box album chart: #1
Peak on the Rolling Stone chart: #1

Tracks: 9 tracks, 40 minutes. I dig all the singles, but if I had to pick a top choice, I'd go with Open Your Heart. I also like Where's The Party but usually skip Jimmy Jimmy (the dichotomy of '60s girl group writing with '80s synth bass/drum progamming arrangement just doesn't do it for me).

Personal Memory Associated with this CD: I picked this one up through one of several encounters I had over the years with Columbia House. I'm not sure how many cassettes I got on that initial order (had to be a dozen, right?), but I only remember 3: True Blue, a Stevie Wonder compilation which I wore out playing I Was Made To Love Her over and over and over, and the epic Volume 6 of Atlantic Rhythm and Blues 1947-1974.