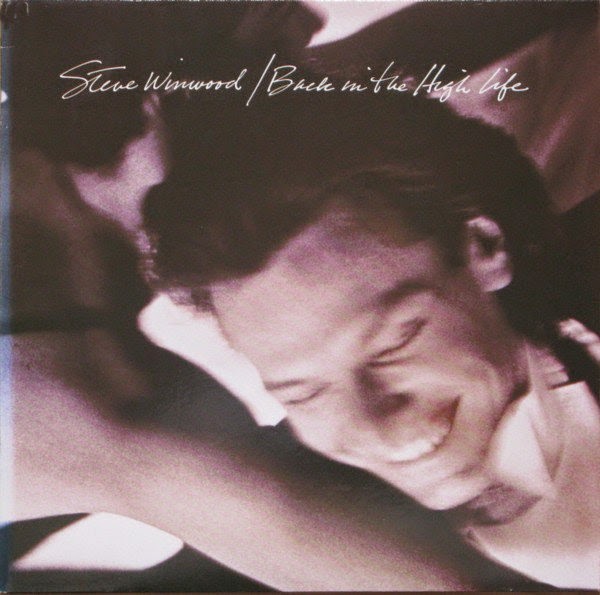 Until this point, Steve Winwood's solo albums were very dense synth-driven music.  I'm a fan of both albums that preceded this one, Arc Of A Diver (1980) and Talking Back to The Night (1982).   This 1986 album was different than those two, bringing in influences and instrumentation new to Winwood's repertoire.  The new sounds led to commercial success (4 of the album's 8 tracks made the top 20 of Billboard's pop charts), but I preferred the older sound.  Still, even though I usually pull out Arc Of A Diver, there's some good songs on this album and I enjoy hearing it every now and again.

Tracks:  My favorite tune on the album is the mandolin-led title track.  The other singles (Higher Love, The Finer Things, and Freedom Overspill) are enjoyable, but I prefer the Joe Walsh collaboration Split Decision to those because Walsh sounds fantastic and Winwood hits the B-3 hard.  The second track, Take It As It Comes, is clearly the forerunner of Winwood's later R&B-driven hit, Roll With It.  The final track, My Love's Leavin', is filler but I enjoy the song because it, like the title track, harkens back to Winwood's previous sound.  Despite a halfway decent chorus, I usually skip Wake Me Up On Judgement Day.


Personal Memory Associated with this CD:  This album is closely tied to the summer of 1986.  I was head over heels in love with the girl who would become my wife three years later.  My parents had moved to San Antonio the previous winter and when I came home from college for the summer, I washed dishes part-time at a Sizzler steakhouse and spent the rest of my time exploring that wonderful city.

I spent most of my Sizzler earnings at malls, in particular Windsor Park Mall (which is now the corporate headquarters of Rackspace) and North Star Mall (where the Texas-sized cowboy boots are located).

I also spent a good deal of money at the city's Sound Warehouse locations, which is probably where I bought my cassette copy of Back In the High Life.

Apart from dishwashing, I have fond memories of that time.  Other albums I closely associate with that summer:
Previously revisited for the blog:
Arc of a Diver (1980)