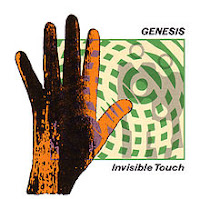 Note: this release was originally purchased as a cassette tape, later replaced by a CD


A hugely popular album in which 5 of its 8 tracks were top 5 pop hits, including the group's only US #1 hit, the title track. I played the heck outta my cassette in '86, so when I recently saw this CD in a used bin, I thought I'd pick it up to remind myself of the other three tracks. Plus, it's a great road trip album and I've been on the road a bit more than usual of late.

On a side note, that's one of the worst album cover designs ever put out by Assorted iMaGes. And it got worse...

While the singles are more like Phil Collins' solo stuff (particularly In Too Deep), there are a few times when the group's prog-rock beginnings* are allowed to peep through on songs like Domino. Also, I had forgotten than Tonight, Tonight, Tonight was actually a 9 minute cut with an extended middle section edited out in the single version. I also forgot how much I liked the album closer, an Miami Vice soundtrackish instrumental titled The Brazilian.

Personal Memory Associated with this CD: see this previous post. I suppose I found much refuge in the music of 1986 because my job was so terrible. Still, I wouldn't trade that summer for anything.

*I want credit for not using the phrase "the group's prog-rock genesis"
Posted by Mark at 9:19 AM