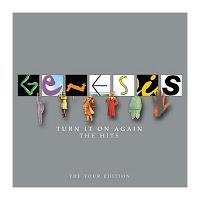 An expanded two-disc edition of the group's 1999 greatest hits package, subtitled The Tour Edition, was released to promote the Turn It On Again reunion tour. My interest in Genesis extends only from 1980-1986, not including their music from 1983's self-titled album. In other words, I'm a casual fan at best and, with the exception of the title track from The Lamb Lies Down On Broadway (not included here), I'm not really interested in the Peter Gabriel years. Admittedly, a two-disc set may have been overkill for me.

Tracks, disc 1: 17 songs.
Songs I like: Turn It On Again, Invisible Touch, Tonight Tonight Tonight, In Too Deep, Throwing It All Away, Abacab, and No Reply At All
I'm indifferent: No Son Of Mine, I Can't Dance, Hold On My Heart, Jesus He Knows Me, Land Of Confusion, and Illegal Alien (which is offensive on so many levels).
I dislike: Mama and That's All ("Dislike" isn't the right term for That's All. I can't stand that song. It would easily make my list of the worst songs of the '80s, possibly topping that list, although any Cyndi Lauper song might give it a run for that spot. I'd rather listen to my Aqua album again.)
Don't remember hearing before today: Tell Me Why and The Carpet Crawlers.

Tracks, disc 2: 17 songs.
Songs I like: Paperlate and Duchess
I'm indifferent: Keep It Dark, Misunderstanding, and Follow You Follow Me
I dislike: Man On The Corner
Don't remember hearing before today: tracks 7-17

Personal Memory Associated with this CD: Purchased for a long trip across the state in 2008, before I had the luxury of satellite radio. I'm sure I skipped many of the songs on that trip, making this the first time both CDs have been listened to in their entirety.

Email ThisBlogThis!Share to TwitterShare to FacebookShare to Pinterest
Labels: Genesis