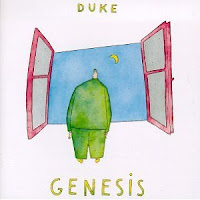 Note: this release was originally gifted to me as a LP, later replaced by a CD.

Guest review by Patrick Bateman: I've been a big Genesis fan ever since the release of their 1980 album, Duke. Before that I didn't really understand any of their work, though on their last album of the 1970s, the concept-laden And Then There Were three (a reference to band member Peter Gabriel, who left the group to start a lame solo career), I did enjoy the lovely Follow You, Follow Me. Otherwise all the albums before Duke seemed to artsy, too intellectual. It was Duke, where Phil Collins' presence became more apparent, and the music got more modern, the drum machine became more prevalent and the lyrics started getting less mystical and more specific (maybe because of Peter Gabriel's departure), and complex, ambiguous studies of loss became, instead, smashing first-rate pop songs that I gratefully embraced. the songs themselves seemed arranged more around Collins' drumming than Mike Rutherford's bass lines or Tony Banks' keyboard riffs. A classic example of this is Misunderstanding, which not only was the group's first big hit of the eighties but also seemed to set the tone for the rest of their albums as the decade progressed. The other standout on Duke is Turn It On Again, which is about the negative effects of television. On the other hand, Heathaze is a song I just don't understand, while Please Don't Ask is a touching love song written to a separated wife who regains custody of the couple's child. Has the negative aspect of divorce ever been rendered in more intimate terms by a rock 'n' roll group? I don't think so. Duke Travels and Dukes End might mean something but since the lyrics aren't printed it's hard to tell what Collins is singing about, though there is complex, gorgeous piano work by Tony Banks on the latter track. The only bummer about Duke is Alone Tonight, which is way too reminiscent of Tonight Tonight Tonight from the group's later masterpiece Invisible Touch and the only example, really, of where Collins has plagiarized himself. (American Psycho by Bret Easton Ellis, p. 133)

This is another one of my "Summer CDs": even though this came out in 1980, I didn't hear it until the summer 1982 when my friend Jim gave me his copy of this LP, thinking I might like it. He did that all the time. This is my favorite Genesis album, maybe because it bridged the gap from prog rock to pop rock. There's a little of each here; I've heard this called "modernist art rock," but that may be a bit pretentious. After this introduction, I bought 1982's Three Sides Live and stuck with Genesis for a while, but lost interest after 1986's Invisible Touch. While I have a greatest-hits collection by the group, this is the only full album in my CD collection. I get it out once a summer and give it a listen for nostalgia's sake.

Tracks: I'm a fan of the first and last songs, which were originally meant to comprise the beginning and end of a prog-rock suite. My favorite track is Turn It On Again, which keeps the listener off balance with its verse in 13 (6+7) then relaxing into 4 before returning to 13. I also like Cul-de-Sac, the most prog rock track on the disc. I know that Misunderstanding is the hit from the album, but I'm not wild about it; I can take it or leave it. Today I had to take it. My least favorite track is Alone Tonight, which is clear album filler. I hate to disagree with Patrick (above), but the liner notes indicate that Alone Tonight was written by Rutherford. That Patrick dude is crazy like that (I don't think he knows what he's talking about half the time). I'm not wild about Collins' ballad, Please Don't Ask, but it definitely pointed the direction he would take over the course of his career.

Personal Memory Associated with this CD: My freshman year in college, I roomed next door to Tom, a huge Phil Collins fan. He and I got along splendidly, but at the end of that school year, he decided not to return to that university the next fall. He owned all of the albums of both Phil Collins and Genesis, except Duke. When I saw him for the last time that May (in a scene so touching it could be in a Lifetime made-for-tv movie), I gave him my Duke LP to complete his collection. I'm a re-gifter and I don't care who knows it.
Posted by Mark at 12:59 PM

Email ThisBlogThis!Share to TwitterShare to FacebookShare to Pinterest
Labels: 1980, Genesis