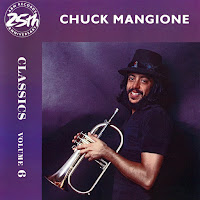 A "best of" compilation, covering the flugelhornist's years on the A&M label (1975-82). These were his most commercially successful years; I myself became a fan in '78 as I was just learning to play trumpet while Chuck was hitting #4 on the pop chart with "Feel So Good." Bonus points for using the longer cuts rather than the single edits.

Tracks: I dig 'em all and have for years. The Grammy voters seemed to like his stuff, too.

Personal Memory Associated with this CD: None. Just purchased the disc for the (admittedly bland) Cannonball Run Theme. If I've seen that movie in its entirety, I don't remember it. Never seen the Children of Sanchez movie, either.

Land Of Make Believe has been a staple of marching band shows for almost 40 years. I've personally taught marching drill to that song twice myself.