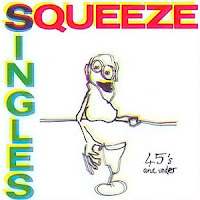 One of the greatest "best of" collections of the '80s bar none. This was one of the first albums I replaced with a CD back in the late '80s. I've since picked up all the Squeeze studio releases on CD, but I've kept this around solely for the non-album single, Annie Get Your Gun, which isn't the best Squeeze song, but at the time it was noteworthy because it would be the last Squeeze single, ever (well, as it turns out, maybe not).  From the November 11, 1982 edition of Rolling Stone magazine: 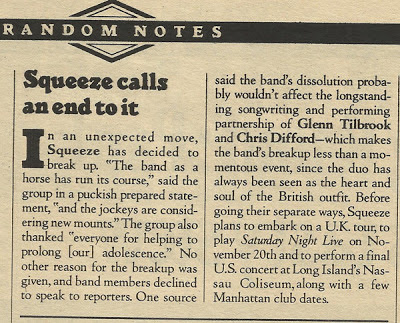 That brief item made me sad.  Fortunately, the break-up didn't last long.  And I was happy again.

Tracks: We've seen all but one of these songs before.  For my opinion on the titles and the albums they came from, click on the links on the right side of the table.

Personal Memory Associated with this CD:  In high school, I dubbed a cassette copy of the album so I could listen to it in the car.  I remember thinking that, in order to save me time fast-forwarding through the tape, I would only record the really good songs off the album.  Needless to say, they all made the cut, even though I wasn't wild about the last two tracks.