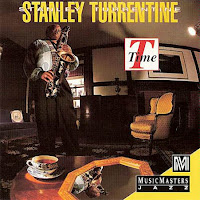 I recently rescued this CD from the $1 clearance bin. It's an enjoyable effort from the veteran saxophonist in which he mostly re-records some tunes from earlier releases, including a take on his signature tune, Sugar, re-titled A Little Sweetness. My only complaint concerns the choice of using synth pads instead of bringing in a real string section, but that's a minor quibble.
Peak on the US Billboard Top 200 chart: Did not chart

Tracks:
The previous owner of this disc had indicated their favorite tracks by writing on the disc itself in red pen: "1, 2, 7, 8" and while I prefer track 5 to track 8, I'm pretty much in agreement with that opinion (except the writing on the disc. Don't do that, folks.). However, there's nothing to skip here - while the album concept/theme of re-recordings gets a bit redundant, the performances here are first-rate and everything swings.

Previously revisited for the blog:
The Best of Stanley Turrentine (1990)
Posted by Mark at 7:53 AM