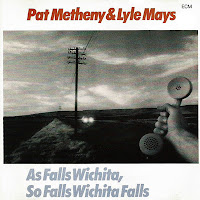 In December 1984, my then-girlfriend gave me this Metheny/Mays album as well as a Canadian Brass album as gifts. As we listened to this album, she explained to me that the 21 minute title track on side 1 was more-or-less a tone poem about the 1979 Red River Valley tornado outbreak. With that suggestion placed in my mind, of course I could hear what she was talking about, right down to the counting of storm casualties around the 14:45 mark. I had no reason not to believe this woman, but I never saw any written confirmation of her claims. To be fair, she was probably just parroting something she'd been told. Or maybe, since we were both going to college at the time in 'Tornado Alley,' she was trying to frighten me and I'll have to admit I was susceptible to such tactics at that age.
However, music scholar Mervyn Cooke, in his fine book Pat Metheny: The ECM Years, 1975-1984, contradicts that claim: 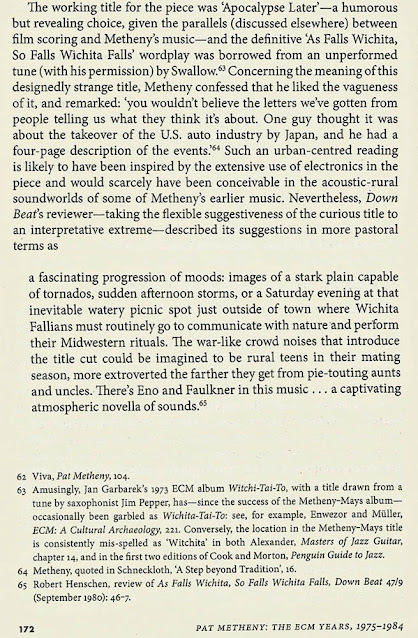 Finally, after much searching, I came across this brief mention in Texas Monthly magazine:

Touring records indicate that Metheny had a date in Monroe, LA on April 10, 1979, but that's close enough as the storm moved east after hitting the Wichita Falls area. So which interpretation is correct? Hell if I know. Pick one. Or make one up yourself. Metheny didn't return requests for comment, most likely owing to the fact that I'm lazy and didn't make any such requests.
But enough of titles - let's move on to the music. Sure the title track can be a bit of a chore, but overall I like Metheny albums around this time when Brazilian vocalist/percussionist Nana Vasconcelos was a sideman. I really dig his contributions - plus he was a good influence on Metheny's writing, particularly evident in tracks 4 and 5, "It's For You" and Estupenda Graça (which roughly translates as 'amazing grace' and there's bits of that in there). And, other than the title track, there's a lot of acoustic instruments on this album, which adds a timelessness to this now 40 year old release.
Press of the time:

Tracks: My favorite cut is track 4, "It's For You" and it's not even a close race even though, as noted by the reviewer for Musician magazine above, the tracks that make up what was side 2 of the album (tracks 2-5) are all quite enjoyable. As for the title track, I prefer the shorter version offered up on the live Travels album. It's got an very tuneful theme that, unfortunately, is never expanded or explored.
Curiously, both September Fifteenth and "It's for You" (tracks 3 & 4) appear in the soundtrack of the 1985 road trip comedy, Fandango.

Personal Memory Associated with this CD: The relationship between me and the above-mentioned "then-girlfriend" was probably doomed from the start as I was 18 and wanting to sow some wild oats while she was 23 and wanting to settle down and start a family. We lasted 7 or 8 months. It all made for a confusing and enlightening freshman year of college for myself.
I also had a good friend in college who was a huge Metheny fan. He had Metheny's entire catalog on prerecorded cassettes and was eager to share said tapes and talk about Metheny anytime, anyplace. If his social media feeds are factual, he remains a huge fan to this day. When I met this guy, the only Metheny I had previously heard was the Offramp album, so I eagerly lapped earlier ECM jewels like American Garage and Pat Metheny Group, then First Circle was released and I was hooked. Hearing all those great albums in my late teens is probably why I still prefer Metheny's ECM recordings to his later stuff. And ultimately, in a bizarre, cosmic coincidence, that huge Metheny fan later ended up marrying the very same "then-girlfriend" who originally gave me this Wichita album back in '84. Life sure is a funny old dog.