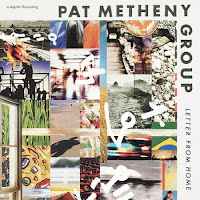 Along the same upbeat, South American-influenced lines as First Circle, this one just doesn't grab me like that one. That doesn't mean I don't dig it, though. Lots of typical Metheny odd time signatures and key changes to hold interest. So it works on two levels - if you're not paying much attention, it's pleasant background music, but if you are listening actively, there's lots to discover, particularly the quality of Metheny's soloing.
The album won the Grammy Award for Best Jazz Fusion Performance, a category that existed from 1980-1991. During those 12 years, Metheny won the award five times.
Press of the time:
Peak on the US Billboard Top 200 chart: #66
Peak on Billboard's Top Contemporary Jazz Albums chart: #1
Peak on Cash Box Contemporary Jazz chart: #1
Peak on the Rolling Stone chart: #26

Tracks: Slip Away was the "hit" (heck, Geffen even funded a video for the track). It's the most accessible tune, for sure. The album starts off with three strong tunes and Beat 70 might be the best cut on the album. There's a few skippable cuts (tracks 5, 9, 10), then the album ends strong with Slip Away and the title track.

Personal Memory Associated with this CD: None, but I could easily pair this with the aforementioned First Circle and hit the open road with them providing the soundtrack. And just might. This afternoon, in fact.