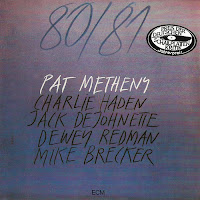 Out of print German import. Best I can tell, the seal in the upper right corner of the booklet cover translates to something along the lines of "German records annual prize."

According to the book Pat Metheny: The ECM Years, 1975-1984, this album "has long been considered a landmark achievement of Metheny's. He himself regarded it as not only his most pleasurable ECM experience but a vitaly important culmination of his musical preoccupations in the years which preceded it." That may all be true, but all that matters to me is that I dig the thing and I'm glad he was able to record with this stellar stable of sidemen, if only for one album.

The album was originally a two LP set with the following sequence: 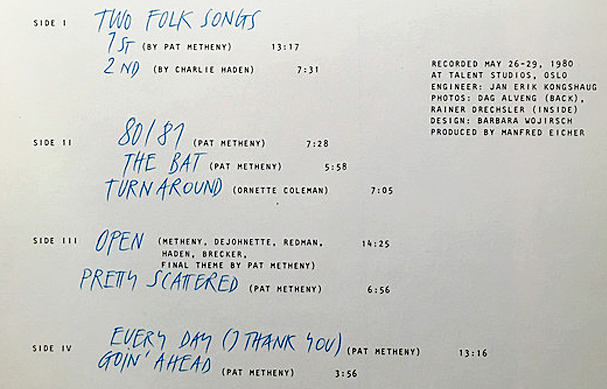 80/81 has since been released as a proper two CD set that keeps the original sequencing. However, the original one disc version I picked up removes the more experimental free jazz of side three in its entirety while re-sequencing the other tracks:
Go figure.

Tracks: Track 1, Two Folk Songs, is a 20 minute tour de force from all players, but the Metheny graciously takes a back seat to the band: I'm mesmerized by Brecker's tenor work and DeJohnette's not one, but two solo takes, as well as the melodic playing of Haden. Fastest 20 minutes of my day. Every Day (I Thank You) and Goin' Ahead are as beautiful as any ballad Metheny composed. Every Day features Brecker while Goin' Ahead is strictly a Metheny solo joint. I'm not okay with those being in the middle of the CD sequence, but that's easily corrected. I also dig The Bat with contributions from both Brecker and Redman.

Personal Memory Associated with this CD: None. For some reason, when I was discovering Metheny in the mid-80's, I missed this set. My mistake. 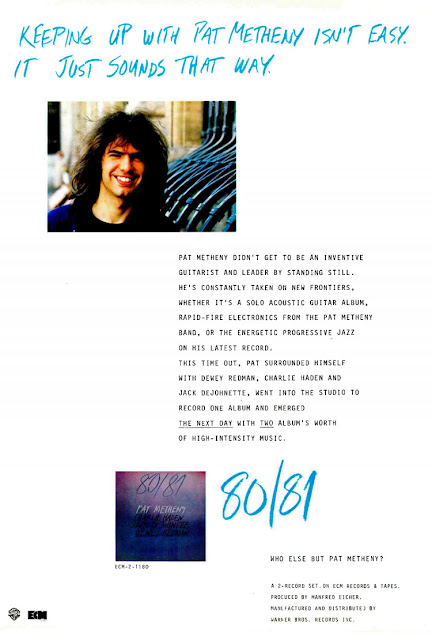