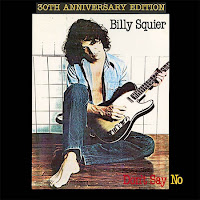 If I were to say that this album sounds like (somewhat better) Robert Plant-ish wailing on top of some quality Sammy Hagar-ish rock-pop riffs, some people would see that as an insult while others would consider it a compliment of the highest order. Anyway, that's what this music sounds like to me and I dig it.
There's no denying the album's success on the rock charts with a couple of Top 40 appearances, as well.

Tracks: I nominate the first 28 seconds of In The Dark as the best rock album opening since Van Halen's Runnin' With The Devil a few years earlier. Tracks 1-7 here are solid, there's a 2 track lull, then I'm onboard again for the closing track, giving the album a winning batting average of .800. But if I'd had this cassette back in '81, I would have definitely played side 1 way more than side 2.
Bonus tracks: Extended live versions of My Kinda Lover (8 minutes) and The Stroke/concert jam (14 minutes) from Squier's 2009 tour.

Record Company Exec: Billy, we're putting out a special '30th Anniversary Edition' of Don't Say No next year and we're looking for anything to make it different from previous reissues. Do you have any B-sides from '81?
Billy Squier: Nope
RCE: How about some tunes you threw together for movie soundtracks?
BS: Don't own the rights.
RCE: Demo tracks?
BS: Nah, man.
RCE: Do you have anything we can tack on to the end of the CD?
BS: I've got a couple of board mixes from last year's tour.
RCE: That'll have to do.

Personal Memory Associated with this CD: During my first two years in high school, all the "cool senior boys" would back their mid-70's Ford or Chevy pick-up trucks into parking spots next to the football stadium about 15 minutes before school began, stereos blaring. In addition to the driver, the truck cab would normally seat the driver's current girlfriend. Tradition held that the truck have bench seating and the girl would sit as close to her boyfriend as physically possible without actually climbing into his lap (this was a few years before wearing seatbelts was mandatory in Texas, not as if that would make any difference to young lovers). Trucks entered the school's parking lot at the slowest rate of speed possible with windows down and loud rock music testing the limits of stock speakers. Occasionally, they'd play the radio (either Moby in the Mornin' on 97 Rock or Stevens & Pruett on KLOL), but this Squier album was a popular choice for the tape decks, as was Tattoo You and any Van Halen available.

Back in '81, the high school campus had a student smoking area and no minimum age to buy tobacco plus the legal drinking age was 19 with no open container law, so there was most likely plenty of other stuff going on in those truck cabs that I naïvely wasn't aware of at age 14.
I've already mentioned how The Stroke was a popular tune among our swim team in the summer of '81.
There's a great acoustic blues version of The Stroke from Squier's 1998 album, Happy Blue, included on the 2006 compilation 80's Hits Stripped. And then there's this.