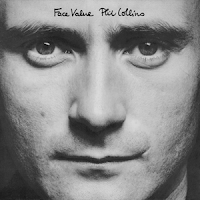 Note: this release was received as a gift as an LP, later replaced by a CD. The CD I picked up is a West German target CD.
After all these years, it's apparent to me that Phil likes 1) drums - lots of 'em, hot in the mix, preferably gated, and 2) to put his face on album covers (it actually makes sense with this album title, but what about No Jacket Required?)
While the album contains a few good cuts, it's a slightly below average album as a whole. What we've got here are two hits that both peaked at #19, one with massive staying power (In The Air Tonight, which might be more popular now than it was in '81) and one that didn't even make the cut for the his greatest hits CD, I Missed Again (ironic, no?). Then there's a Genesis retread from Duke, an ill-advised Beatles cover from Revolver, and tunes that can't decide if they want to be Motown or Earth Wind & Fire. His writing and production styles would later become well-honed and in '81 he was still with Genesis and had recently left Brand X, so I should quit nitpicking and commend him for his impressive recorded output around the time of this release. 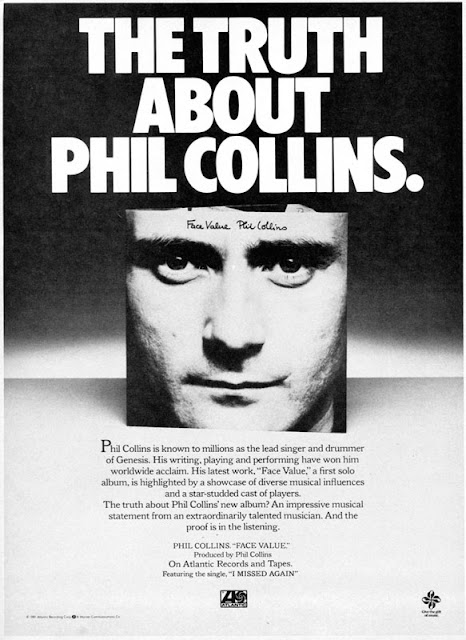 Tracks: I like the two hits and if I'd heard Phil's version of Behind The Lines first, I'd probably like it better than the earlier Genesis take (but I didn't, so I don't).  Thunder And Lightning and I'm Not Moving are good little pop songs and if This Must Be Love had been released, I think it might have been a adult contemporary hit. The stinkers are The Roof Is Leaking, followed by Hand In Hand (just say no to children's choruses) and a song that should never be covered by anybody: Tomorrow Never Knows. The remainder is decent filler - it's apparent that Collins was figuring out how to write a hooky ballad, a skill he would later master.


Personal Memory Associated with this CD: In The Air Tonight was the second single released from the album in the US and hit the top 40 in July 1981, peaking at #19 in mid-August (it had peaked at #2 in the UK back in February). That particular summer was my second to compete in a summer swim league in my area so that song always reminds me of those meets - long and boring with a lot of down time for music listening and general teenage clowning around. 98 degree Texas summer heat, the meet lasts 10 hours and you're actually in the pool maybe 4 minutes.  Another popular song at swim meets that summer? Billy Squier's The Stroke, for obvious reasons.
Years later, of course, In The Air Tonight owned the pilot episode of Miami Vice and then was introduced to my sons' generation in The Hangover.
And on a completely unrelated note, Phil is an honorary Texan and an Alamo fanatic so he's here in San Antonio every now and then. A few years back, Collins generously donated his collection of Alamo and Texana artifacts to the Alamo.