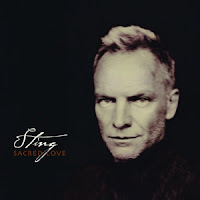 I was a big Police fan and thought Sting was hit-or-miss as a solo act, but his albums trended downward after 1993's fantastic Ten Summoner's Tales (I blame Kipper, whatever that is). My favorite description of this CD comes from an E! Online review: "Rife with hyper-marketable flamenco guitars and jazz pianos, it's world music for people whose idea of adventure is a trip to Banana Republic." I bought this CD upon its release, listened to it once, didn't care for it, and haven't listened to it again until today. Here we go.

Tracks: Bleh. I can't believe this is the songwriting we get from the man who wrote If I Ever Lose My Faith In You and Roxanne. This CD is all about the sound, not the songs. For a minute, I thought the collaboration with Mary J. Blige, Whenever I Say Your Name, was pretty good, then I realized the song's pseudo-R&B vibe is good only when compared to the other bad songs on this release. For the most part, the songs are just boring. I guess the best parts would be the piano solo on Never Coming Home and, if you ignore the lyrics, the title track. Sting is a smart guy (just ask him), it looks like he was smart enough to know he couldn't write good music anymore; to my knowledge he hasn't released any original songs since this release.

Email ThisBlogThis!Share to TwitterShare to FacebookShare to Pinterest
Labels: 2003, Sting