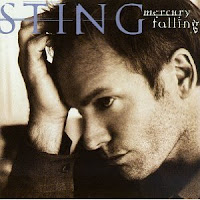 The beginning of the end for Sting. He had a good run for almost 20 years. This CD has some good songs on it, but it is nowhere near as good as Sting's previous CD, 1993's Ten Summoner's Tales. The only problem is that someone needs to tell Sting that he hasn't been relevant in a while. Even if he were told would he believe it himself? But back to this CD: Sting may be unbearably pretentious, but he could write a wicked pop hook when he needed to. This release is just overly ambitious in terms of meter and lyrics and many of the songs just come off as derivative (he rips off soul music, country music, traditional Irish music, French pop music, etc...).

Tracks: The Hounds of Winter, I Hung My Head, and I Was Brought To My Senses are the best of the CD. He fails miserably with Let Your Soul Be Your Pilot, I'm So Happy I Can't Stop Crying, La Belle Dame Sans Regrets, Valparaiso, and Lithium Sunset.

Personal Memory Associated with this CD: I must have listened to this CD while wallpapering a bathroom in '96, because that's the image that is popping into my head. I was "Mr. Mom" back then (1993-97) and didn't appreciate at the time how good I had it.
Posted by Mark at 11:03 AM

Email ThisBlogThis!Share to TwitterShare to FacebookShare to Pinterest
Labels: 1996, Sting