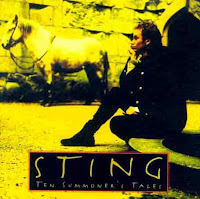 
Sting's last consistently good album and, overall, his best solo album. After two maudlin, downbeat releases, this was an unabashed upbeat pop release, with only a touch of Sting's usual arrogance.
Press of the time:

Tracks: 9 of the 11 tracks are good. It also starts off with my favorite Sting single, If I Ever Lose My Faith In You. Other favorites include Heavy Cloud No Rain, She's Too Good For Me, and Seven Days. I'm usually not a fan of pop ballads, but Fields of Gold and Shape Of My Heart are well done. If you're wondering which two tracks I could do without, they're Saint Augustine In Hell and Something The Boy Said.


Personal Memory Associated with this CD: in my mind, this disc is associated with Simple Minds' Glittering Prize, so they share the same memory: this reminds me of the spring of 1993. I was married, but this was before children. We were in our first house which had a large living area which had been converted from a garage. I had my stereo in there and listened to this CD while sunlight poured into that room during spring break.
Posted by Mark at 10:04 AM