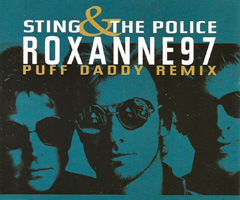 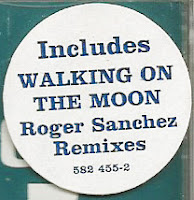 Tracks:
1. Roxanne '97 (Puff Daddy Remix) - About 60% Puff Daddy, 20% Sting, 10% Kool & The Gang, and 10% U.T.F.O. This is 100% awful. Diddy should be paying me to listen to it.
2. Walking On The Moon (Roger Sanchez EVA Mix) - If you like mid-'90s Drum and Bass remixes and lots of echo, then you'll like it. At least it's better than Roxanne '97.
3. Walking On the Moon (Roger Sanchez Darkside of the Moon Mix) - 8 minutes of Sting singing "On the moooooooooooooooon" over and over and over and over and over.
4. Roxanne - they had the courage to put the original Police version on this single and think that the remixes would hold up next to it. Instead, it just illustrated how useless the remixes were.

Personal Memory Associated with this CD: I remember listening to this once and putting on the shelf where it has remained until tonight. After listening, it will now return to the shelf for at least another 13 years.
Posted by Mark at 5:27 PM