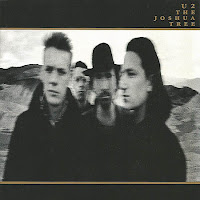 Note: this release was originally purchased as a LP, later replaced by a CD. I believe my CD is the 1992 reissue.

I bought this album upon its release in 1987 and listened to it very regularly for about six months. After I burned out on it, a friend asked if I'd sell my LP to him. I was 21, in college at the time, and wanted some beer money so I made that deal fairly quickly. While the Top 40 singles continue to get played on classic rock radio stations, I haven't heard the complete album since late '87. I recently spotted this CD in the used bin and picked it up. It's been a good, long while, let's give this a spin.

Chart peaks:
Press of the time:
The album won Grammy Awards for Album of the Year and Best Rock Performance by a Duo or Group with Vocal. In Rolling Stone's latest edition of their "500 Greatest Albums of All Time" (2020), The Joshua Tree came in at #135.
Tracks: I had forgotten they front-loaded the thing, leading off with the album's best song followed by the other two hit singles. I can guarantee side one of my LP got much more play than side two. Of the eleven tracks, five rightly hit Billboard's rock charts:
Bullet The Blue Sky, one of U2's most political tunes, wouldn't have been out of place on October - I could do without the earnest spoken word section, but overall I dig it. I had completely forgotten Running To Stand Still and today I'm thinking that it may be the second best song on the album. Red Hill Mining Town has catchy hook at the chorus but I keep waiting for the band to really tear into the arrangement but it just keeps an even keel throughout. I immediately recognize the riff in track 7, In God's Country, and then surprise myself by singing along until it ends abruptly. I vaguely recall the remainder of the album - the bluesiness of Trip Through Your Wires, the Simple Minds knock-off One Tree Hill, the structureless Exit, and the powerful Mothers Of The Disappeared  - which suggests that I probably lifted the needle after In God's Country more often than not. As with most U2 albums, The Edge brings the goods throughout, ably produced by Daniel Lanois and Brian Eno.

Personal Memory Associated with this CD: During the summer of 1987, between my junior and (first) senior year in college, I returned home to live with my parents, took a couple of early morning classes at the local community college, and had a job working with commercial glass, mainly as a glazier. At the time, my parents lived across the street from an elementary school which had some basketball goals on its playground. After work, I'd go shoot at the school and participate in the occasional pickup game. For reasons I can't put my finger on, this album always makes me think of that basketball court and that summer.

Email ThisBlogThis!Share to TwitterShare to FacebookShare to Pinterest
Labels: 1987, longbox, U2