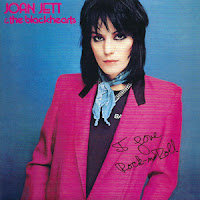 Note: the CD I listened to was the 2006 reissue with five bonus tracks and "bonus enhanced footage" which seems like something I'd find on a 1996 reissue, not 2006.

There are some great rock songs on this disc, but for me, it doesn't really hold up as an full album. Five of the ten tracks are cover tunes, but that doesn't bother me too much - it's what you'd expect from a garage band and, after all, good material is good material. To say the covers are the best tunes here may be stretching it a bit, but only a bit. But it's all good rock n' roll fun, Joan's attitude is contagious, and I think that's the point.
The cover photo is iconic and probably explains why I found heavy mascara so attractive on women throughout my high school and college years. 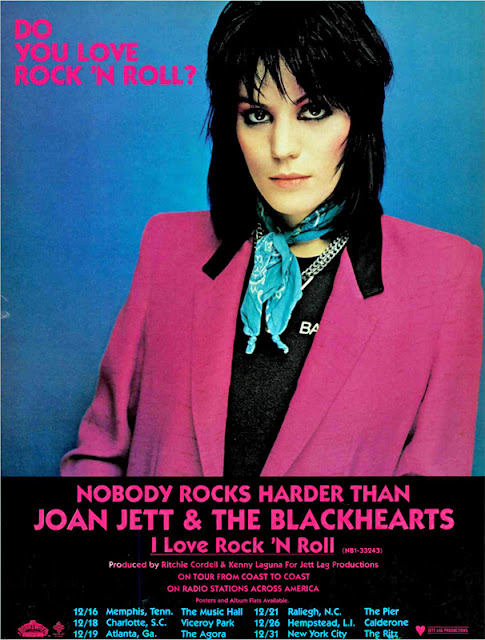 Tracks: let's rank 'em! (with the exception of Little Drummer Boy, which is an original take on a Christmas classic, but let's be honest, it was just tacked on to the end of a November release and was replaced by Oh Woe Is Me on later pressings)
Bonus tracks:
Note: even with the 5 bonus tracks, the entire disc clocks in at 44 minutes.
Bonus enhanced footage:
Personal Memory Associated with this CD: During the spring semester of 1982, I participated on the crew/was an understudy for a high school production of To Kill A Mockingbird. (As I recall, the show was better than the phrase "high school production of To Kill A Mockingbird" would lead one to believe.)

The leader of the crew was two years older than myself, had given himself the title "technical director," and was a pompous ass. One day after school that spring, the crew were setting lights for the play and the title song from this album came on the radio (it peaked at #1 in March '82). As we were wont to do, all of us were singing along as we went about our work. When the chorus came around, this so-called "technical director" belted out "I KNOW A HO! PUT ANOTHER DIME IN THE HO!" His new lyrics weren't as funny as he thought they were, but I was then condemned to hear them for the rest of my life whenever this song plays, including today's listening.