Orchestral Manoeuvres in the Dark - Architecture and Morality (1981) 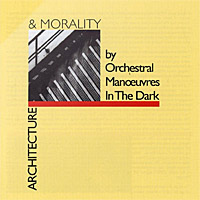 Note: the CD I listened to was the 2003 "digitally remastered edition" EU import.

At the surface, this sounds like some guys noodling around in the studio after binging on a few Joy Division, Gary Numan, and Neu albums. But after awhile, I started to appreciate the songs themselves and the writing more than the studio experimentation. With a nod to Kraftwerk, the band's choruses on this album are often wordless, synth riffs. According to the liner notes, this is the band's classic album, with band member Paul Humphreys saying, "To me this album was our finest hour." I wouldn't have loved this album back in 1981, but I would have recorded a few of the more poppish cuts to a cassette.
As of this writing, the band is finishing up their "Architecture & More" tour celebrating the album's 40th anniversary.
Press of the time:

Tracks: The opening track, The New Stone Age, is not very pleasant but I'm guessing that's what they were going for. In any case, it's my least favorite cut on the album. Things quickly turn around with the catchy She's Leaving, which reminds me of something from Speak and Spell. The best song on the album is easily Souvenir, which peaked on the UK charts at #3. The other two singles from the album, Joan Of Arc and Maid Of Orleans, both about Joan of Arc, made the top ten in the UK, as well. I prefer the former to the latter. The title track is more studio experimentation, but it is followed by Georgia, my second favorite tune on the album.
Bonus tracks: This CD contains 7 bonus tracks - an extended version of Souvenir along with some b-sides, none of which is detailed in the liner notes so I can't tell you anything more about them without an internet deep dive and I just ain't in the mood this morning. I like the extended Souvenir, but as for the rest, I'll take a pass.

Personal Memory Associated with this CD: One day during a high school class in early 1982 (I'm thinking it was a required health course where we were lectured about gateway drugs, abstinence, and STDs by one of the school's athletic coaches who may have had personal experience with all three), a friend brought in a copy of Rolling Stone magazine, issue 362 - I distinctly remember Timothy Hutton on the cover. I looked at it during class and he told me to hold on to it and bring it back to him the next day. So instead of doing homework that evening, I perused the magazine. It was my first time to ever look through a full issue and I was hooked: that random classroom encounter quickly led to a subscription to Rolling Stone for young Mark - one he kept through the early '90s.
What's Rolling Stone magazine got to do with this OMD album? Well, I would have heard some of this music decades earlier than I actually did if CBS Records would have sent this promo record to me, which was advertised in one of the first issues I received in in my new subscription:

I'm not bitter about the fact that I wasn't one of the first five thousand, but I would like a refund of my dollar (plus 20¢ for the stamp while you're at it). I'm fairly certain I wasn't the only person who paid $1 and didn't get a record, which makes me question the above claim that "we stand to take a loss on this."

Email ThisBlogThis!Share to TwitterShare to FacebookShare to Pinterest
Labels: 1981, Orchestral Manoeuvres in the Dark