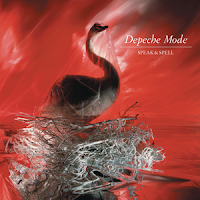 What gives, Mark? Weren't you once dismissive of a Depeche Mode compilation? And you say you're not much of a DM fan?
All that's true, but I am a fan of Vince Clarke and that makes all the difference with this CD. I once read this album described as "Yaz(oo) with Dave Gahan singing instead of Allison Moyet." Well, not exactly, but pretty darn close (particularly on track 10, Any Second Now). And that's fine with me because Clarke is one of the best synthpop songsmiths and has been proving that fact for 40+ years now, most of those years as a member of the duo Erasure.
This is a collection of three-or-four chord pop tunes that's very easy going down and it's made even better when you allow yourself to remember the band was around 19 years old when they wrote and sequenced/performed it. Many DM fans don't particularly care for it, much like Squeeze fans generally disregard their first album. I like it just fine, just don't ask me to interpret the album cover ya. I think the 7 out 10 rating from Smash Hits (below) is on the money.

Tracks:
I feel that Puppets, Photographic, and Tora! Tora! Tora! would appeal to later Depeche Mode fans, but not much more than those.

Personal Memory Associated with this CD: None. The 1981 edition of Mark probably wouldn't have enjoyed this as much as the 1983 edition, who would have absolutely loved it.