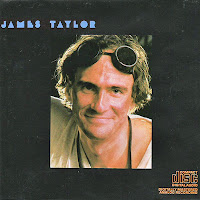 Note: the edition I have is the 1984 'made in Japan-for-US market' CD pressing.
A statement my sons would never make? Dad loves his work. But I'm recently retired so that point is now moot. [humblebrag cheesy grin]
There are a few immediately identifiable voices that emerged during my formative years that are always a delight to hear: Linda Ronstadt, Michael McDonald, Karen Carpenter, and James Taylor, who probably truly does love his work. All his acoustic guitar folky-pop just goes down so damn easy on these ears. This album certainly isn't Taylor's best effort (it currently ranks 20th out of 26 over at besteveralbums.com), but I'll spin it every now and then.
The material's good, not great, and what was side one is much better than side two. But there's too much unnecessary slide guitar and the male falsetto voices just don't work - if you're writing singing parts in that range, I believe the material is better suited for females.
Press of the time: 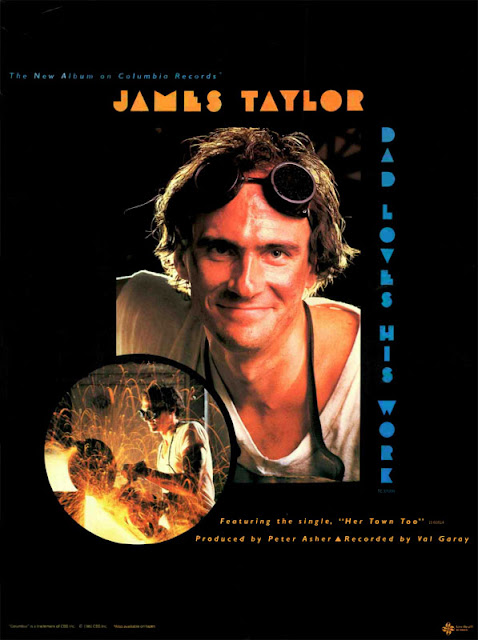 Tracks: There's no doubt the cream here is the duet with J.D. Souther, Her Town Too. It peaked on the charts at #11 pop, #5 adult contemporary, #21 rock and was Taylor's 14th and final Top 40 appearance. That fact surprised me as did the fact that Taylor wasn't even so much as nominated for a Grammy award throughout the entire decade of the '80s. Still, Her Town Too is one of the better melancholy break-up songs you'll come across. Also good are I Will Follow, and Summer's Here, and Hard Times, a single that charted at #72.


Personal Memory Associated with this CD: Around the time this album was released in 1981, I travelled on a Saturday morning to Victoria High School to compete in the band's annual solo & ensemble competition. Any memories of a cold, 3 hour ride on a yellow school bus have since been suppressed with extreme prejudice. I didn't participate in a small ensemble that year, but I did enter a trumpet solo entitled Antares, written by the late H.A. VanderCook (founder of Chicago's VanderCook College of Music), originally published in 1938, and amazingly still in print as of this writing. In other words, that piece is an old war horse when it comes to such solo competitions and holy pack rat Batman wouldn't ya know I still have my sheet music (1981 cost: $1.50). Ideally a competition against a standard and not peers, each solo is heard by a judge and given a roman numeral rating of I (superior) to V (poor). My mediocre-at-best performance probably earned a III, but that day the judge took pity on my scrawny ass wanted to encourage my progress as a musician and gifted me a II. Child trumpet prodigy, I weren't. The above tale doesn't have much to do with this James Taylor album other than coincidental timing, so never mind. As you were.
Previously revisited for the blog:
Greatest Hits 2 (2000)
Hourglass (1997)
Greatest Hits (1976)
Posted by Mark at 7:01 AM