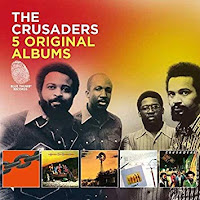 A budget-priced box set featuring The Crusaders studio albums released during the years 1975 - 79, the second prime era of the group's long career. No liner notes, just cardboard sleeve replicas of the original vinyl releases, but for $16 I ain't complaining. 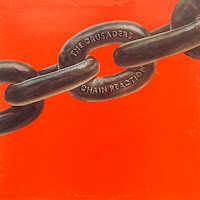 
The band had five members for this release: Wayne Henderson - trombone, Wilton Felder - bass, saxophone, Joe Sample - keyboards, Stix Hooper - drums, and Larry Carlton - guitar. This album mixes it up nicely with funk (Creole, Give It Up, Hot's It), melodic '70s jazz-rock (Chain Reaction, Mellow Out, Soul Caravan) and some slow burners (I Felt The Love, Rainbow Visions). The only problem here is that there are so many artists that can be featured, but so little time. Occasionally, they step all over each other's playing, but that's a minor complaint. I think Joe Sample's electric piano steals the show, but then again, I always think Joe Sample steals the show. Of the reviews I found online, the consensus is Chain Reaction is the group's best album since they dropped "Jazz" from their name. 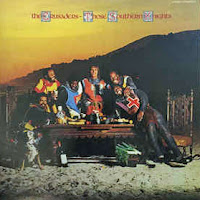 
Sweet mama this is good stuff. Classic mid-'70s jazz fusion timbres on some funky grooves, both fast (Spiral) and slow (And Then There Was The Blues). Carlton and Sample shine throughout. And it is remarkably consistent - I dig all of what was side one (tracks 1-4) and most of side two, except for track 6, Serenity, which never seems to get where it wants to go. But don't let that discourage your from spinning this album, which is one of the group's most enjoyable if you simply want to set it and forget it. 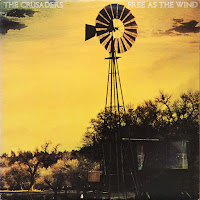 In my opinion, the first three albums of this box set represent the peak of this group's studio output and I'd be hard pressed to pick one above the others, but Free As The Wind just might win in a photo finish. This release is the first without trombonist Wayne Henderson and, as one would expect, Joe Sample picks up the slack. Don't skip any tracks, but by all means listen to The Way We Was multiple times. The review below states that "lots of bands can cook but the Crusaders know how to simmer..." 'Nuff said.

Larry Carlton would later re-record Nite Crawler on his self-titled 1978 album and Lee Ritenour would tastefully cover It Happens Everyday on his Rio album. 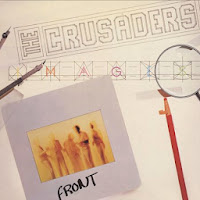 Note: this release was originally purchased as an 8-track tape, later replaced by this CD.

I first heard this album in 2014 after picking up a copy of the 8-track tape. You can read my initial thoughts here: My Favorite Decade: Crusaders - Images. My views haven't changed much. Larry Carlton had left the band and that was a huge blow. The remaining band members certainly bring their best, but ultimately, Images doesn't hold up when compared to the previous three efforts. Shrug - it was bound to happen sooner or later. 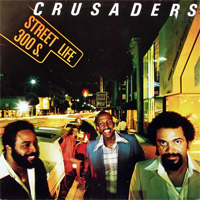 Note: this release was originally purchased as a LP, later replaced by this CD.

And then there were three: Sample, Hooper, & Felder. The epic title cut is the obvious highlight of the album, the commercial peak of the group's career, and served as my introduction to the group. From the 2005 book 1001 Albums You Must Hear Before You Die (p. 426):


The 11-minute-plus title track that kicks off the six-cut collection is so strong that it could be released as a four-track EP with an instrumental, radio edit, and live version thrown in - and still qualify as a classic.

Of the remaining five tracks, I'm partial to Rodeo Drive (High Steppin'), Carnival Of The Night, and Night Faces.

This whole box set is making me long for the 5-disc CD player I purchased in the mid-to-late '90s.

Personal Memory Associated with these CDs: None. I wish someone had introduced me to these albums when they were released. At the very least, I would have worn out Street Life on my turntable in 1979-80.

Previously revisited for the blog:
Rural Renewal (2003)
Posted by Mark at 5:37 AM