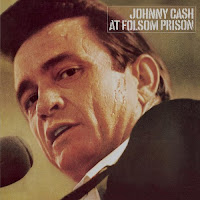 Yes, I bought this CD after watching the 2005 Cash biopic, Walk the Line. What of it? It doesn't mater how I found it, I'm better for experiencing this music. People who blame violence and misogyny on rap music or heavy metal lyrics should hear these lyrics from the '60s. Controversial lyrics are nothing new. Interestingly, this CD does not bear the RIAA's music advisory label (maybe Tipper Gore was a Johnny Cash fan?). But just listen to songs like Folsom Prison Blues or Cocaine Blues and you'll see what I mean. Cash doesn't have the best voice in music, but he has the perfect voice for this music. In the liner notes, Cash calls the convicts "all brothers of mine" and you can hear it in these songs. Even the love songs have a rough edge of loneliness and heartache. I don't have many country albums, but I do have this classic. It's not something I listen to often; I have to be in just the right mood, otherwise it's just too depressing.

Tracks: Folsom Prison Blues, Busted, Orange Blossom Special, Jackson, and I Got Stripes are highlights for me.

Personal Memory Associated with this CD: None
Posted by Mark at 3:27 PM