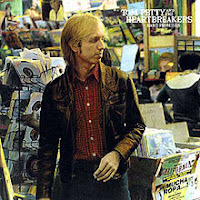 Some of the press for this album's release focused on its price point:
Adjusted for inflation, 1981's $8.98 is today's $26.17. As of this writing, list price of new vinyl of Hard Promises is $24.98 so that's pretty darn close. All of which has absolutely nothing to do with the music, but I was curious so there ya go.
There's some fun rockers on here, but I find myself zeroing in on Benmont Tench's organ work which seemingly holds all the arrangements together. Overall, this album is front-loaded and doesn't stand up to repeated, active listening but it's fine for background music or if you've got a Petty shuffle playing on the back porch. The critics liked it better than me:

Tracks: The album's singles got airplay aplenty (at least on the stations I was listening to in '81). The first three tracks all charted in Billboard: The Waiting (#19 pop, #1 rock), A Woman In Love (#79 pop, #5 rock), and Nightwatchman (#21 rock). I like all three of those, particularly Nightwatchman which might be the best cut on the album. Of the remaining filler tracks, I like Kings Road, The Criminal Kind, and Letting You Go, the latter sounding like something Nick Lowe might have written. I'm not a fan when Petty oddly affects an exaggerated (Southern? Dylan?) accent such as in Something Big - I don't see the point. Speaking of Petty's voice: while I don't care much for track 8, Insider, I gotta admit Petty's voice paired well with that of Stevie Nicks; I'm glad they recorded together. If I'd owned this album in '81, I feel sure I would have spun side 1 much more often than side 2.


Personal Memory Associated with this CD: None.