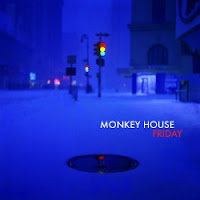 I've told this story before, but it's worth repeating: back in 2008, I "liked" a Steely Dan group on Facebook and, because social media loves to sell my personal data, I soon saw an ad that said something along the lines of "if you like Steely Dan, you'll like this Monkey House album." Based on that Facebook ad, I bought the thing unheard and immediately fell in love with the music. I've since purchased the group's whole back catalog, checked out any new releases, including this recent album.

From the album's press release:


Sophisticated musicianship, imaginative lyrics, and a flair for melody are signatures of the sound of Monkey House, a sound that has earned the group serious critical acclaim, peer respect, and a steadily expanding international following.

Breithaupt says this is the best Monkey House album and I'm glad he said it because there's no way I could pick a "best."

Peak on the US Billboard Top 200 chart: none, but as of this writing, it sits at #11 on Billboard's Contemporary Jazz Albums chart.

Tracks:
Personal Memory Associated with this CD: None. Only recently released, I just got my autographed copy that I pre-ordered months ago as part of the group's Indiegogo campaign.

Also, the beautiful cover photo is "Times Square, 1958" by photographer Pete Turner, whose photos graced the covers of many CTI/A&M jazz albums in the '60s and '70s. And now I'm down that rabbit hole.