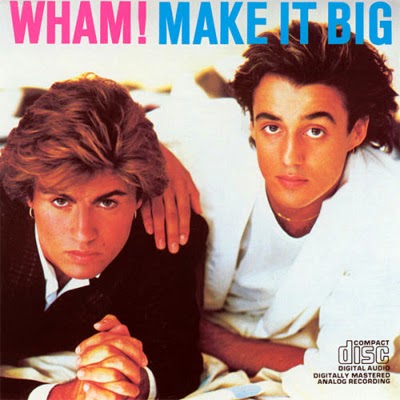 I really enjoy this British blue-eyed soul music and I can't argue that George Michael wrote some great songs here, but I couldn't really buy this album back in the '80s because, in my mind, I saw it as a chick album.  Admittedly, that was a mistake on my part, particularly since I love the song Everything She Wants so much (see below).  Most of the tunes are completely derivative of the Motown sound, but the hooks are so good that I don't mind.  Michael takes care of business not only as a songwriter and producer, but he's got a voice that perfectly suits his material.

And now I can't get the sax lick from Careless Whisper outta my head.

Tracks:  Half the album charted and I like all these singles:


Of the other songs, I enjoy the laid-back groove of Like A Baby and while the cover of the Isley Brothers song If You Were There isn't too imaginative, it sure fits perfectly on this album.  And only in the '80s could we have a song titled Credit Card Baby.  The only skippable track is the Spector-via-Springsteen wannabe, Heartbeat.

Personal Memory Associated with this CD:  Everything She Wants is my favorite Wham! song not only because it's a great song, but because I thought I was living the lyrics at the same time the song was peaking at the top spot on the pop charts. I probably wasn't anywhere to close to living those lyrics, but to an 18-year-old drama queen, it sure seemed that way at the time.

Bonus: Everything She Wants is also enjoyed in the house on the Non-Stop-Pop radio station on Grand Theft Auto V.

Email ThisBlogThis!Share to TwitterShare to FacebookShare to Pinterest
Labels: 1984, Wham!